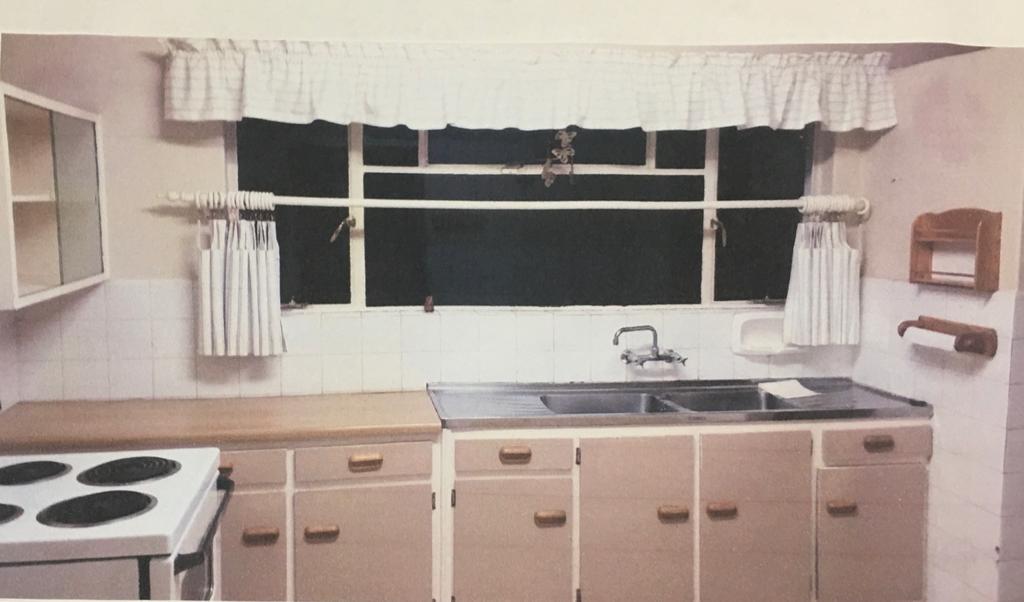 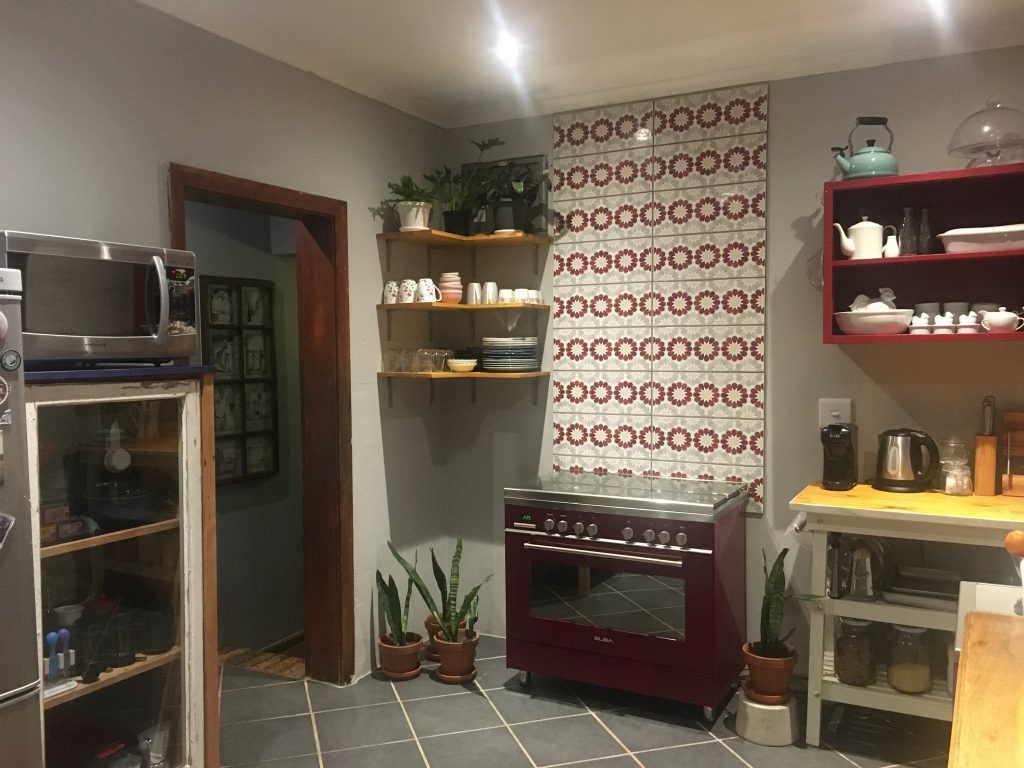 We bought a fixer upper without knowing exactly what awaited us. Everything needed an update. The floors were covered with either ’70s-style long-hair carpets or very outdated vinyl flooring. Prior to buying, we saw on the plans that the house had parquet flooring and we hoped with all our hearts that when we lifted the…

We bought a fixer upper without knowing exactly what awaited us. Everything needed an update. The floors were covered with either ’70s-style long-hair carpets or very outdated vinyl flooring. Prior to buying, we saw on the plans that the house had parquet flooring and we hoped with all our hearts that when we lifted the carpets, we would be met with gorgeous parquet. Unfortunately, we were not so lucky and what we got was the gluey black residue of the bitumen used back in the day when installing parquet. We bought the tiles for the splashback (imported from Italy) and the Elba Stove even before the property was officially transferred into our names. I thought the kitchen would be done within a few months after moving in. We obtained numerous quotes for the kitchen (ranging from R60k to a whopping R180k for the cabinetry alone), but we were never in the financial position to just get on with it. And so we slowly started to renovate as our very small budget allowed.

The house came with the original kitchen (1969) and we did not enjoy being in the kitchen at all. The countertops were at an awkward height as it was customised for the previous owner who was really short. After a few frustrating years, we decided that we would need to prioritise the kitchen and put our yearly bonuses towards renovating the kitchen. One December, we planned our renovation and holiday to a tee. We had a week for renovations, a week for a “relaxed” trip on the Orange River with friends, and a couple of days back at home before we had to return to work. We were confident that we could rip out the old kitchen and wall tiles, give the old girl a lick of paint and have some freestanding cupboards within the planned week. Oh, how wrong we were.

Our first obstacle came when we could not remove the tiles from the walls without damaging the plaster beyond repair, for the tiles were in fact cemented onto the bricks directly with no layer of plaster in-between. We contemplated doing the plaster work ourselves, but after a serious chat with my dad, we decided that plastering is one DIY project we didn’t feel comfortable tackling ourselves. We needed a builder. Problem was that (and obstacle number two) it was at the beginning of the Builder’s Break. Luckily, after a few desperate Facebook posts, Quentin came through and assisted us with the plastering of the walls – not without drama as they mixed the plaster in the middle of the kitchen floor after a slight misunderstanding. The third obstacle we faced was the drying time of the plaster. It brought new meaning to the saying “to watch paint (or plaster in our case) dry”. We were not able to paint the primer before we had to leave for our rafting trip on the Orange River. Defeated and depressed we left for Namibia. The trip was not as the brochure sold it. It ended up being very tough with long hours of hard rowing in the scorching heat of the Namib sun and very little relaxing. Back at home, with aching bodies, we needed to power through and create a functioning kitchen before the new work year started. We cleaned up, painted everything ourselves, including the floor, and added some shelf space. Chris-Jan did an amazing job with the plumbing (his first plumbing job ever), he installed the down lights and we even did the tiling behind the stove ourselves (after watching a bunch of YouTube tutorials). The very last thing outstanding was the gas installation and an end to microwave meals was in sight. We ended up with a practical and functional space. We still want to add more cupboards to the kitchen, but even without these cupboards we are enjoying the space. We are tremendously proud of what we’ve achieved and love the space. 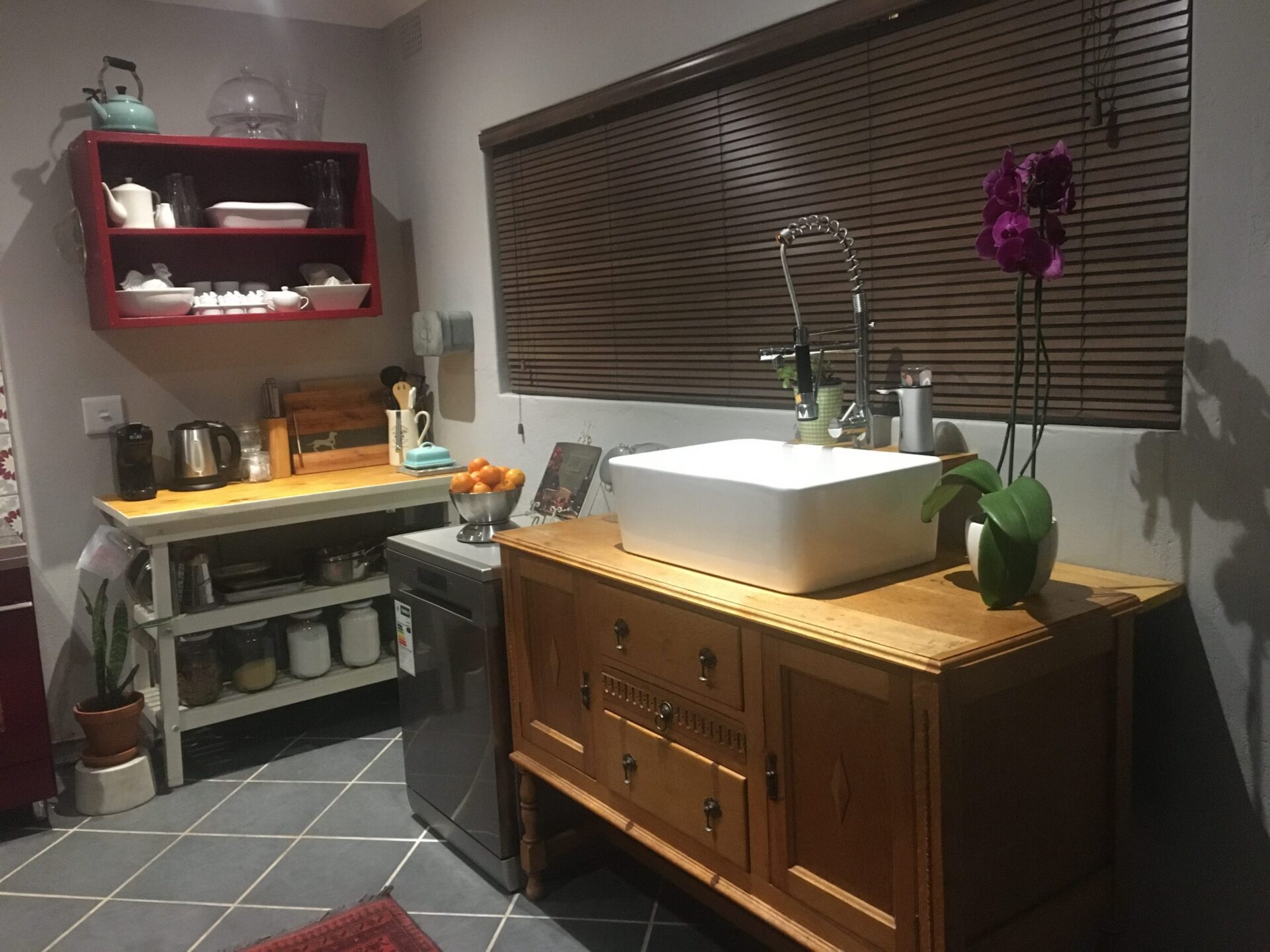 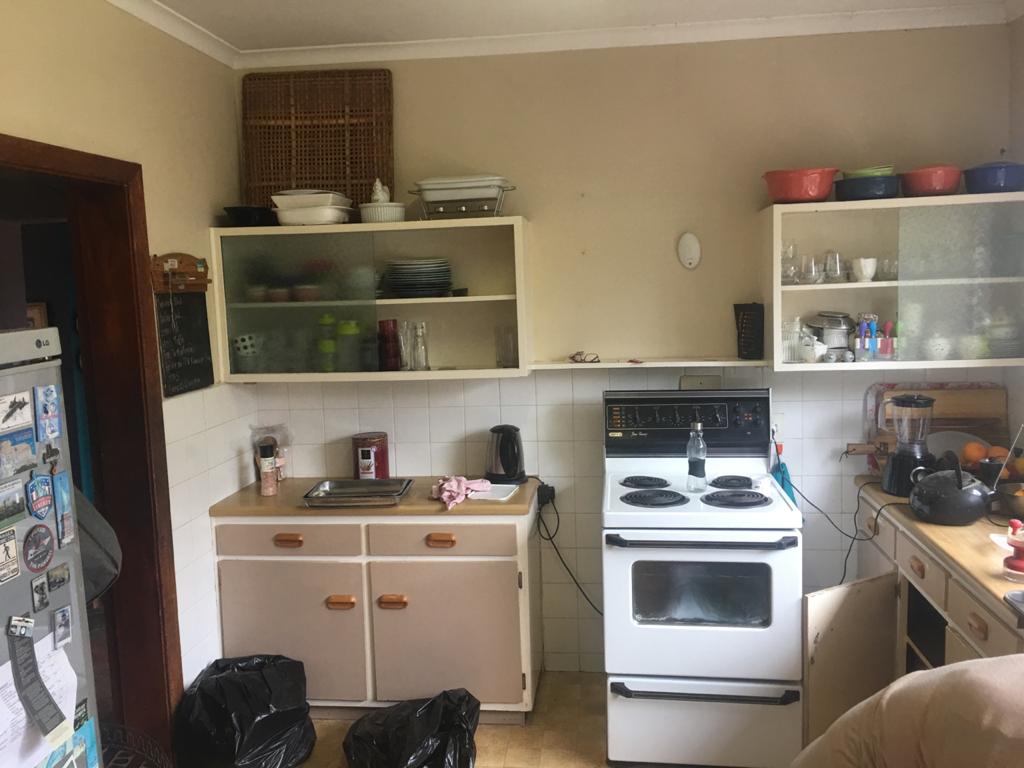 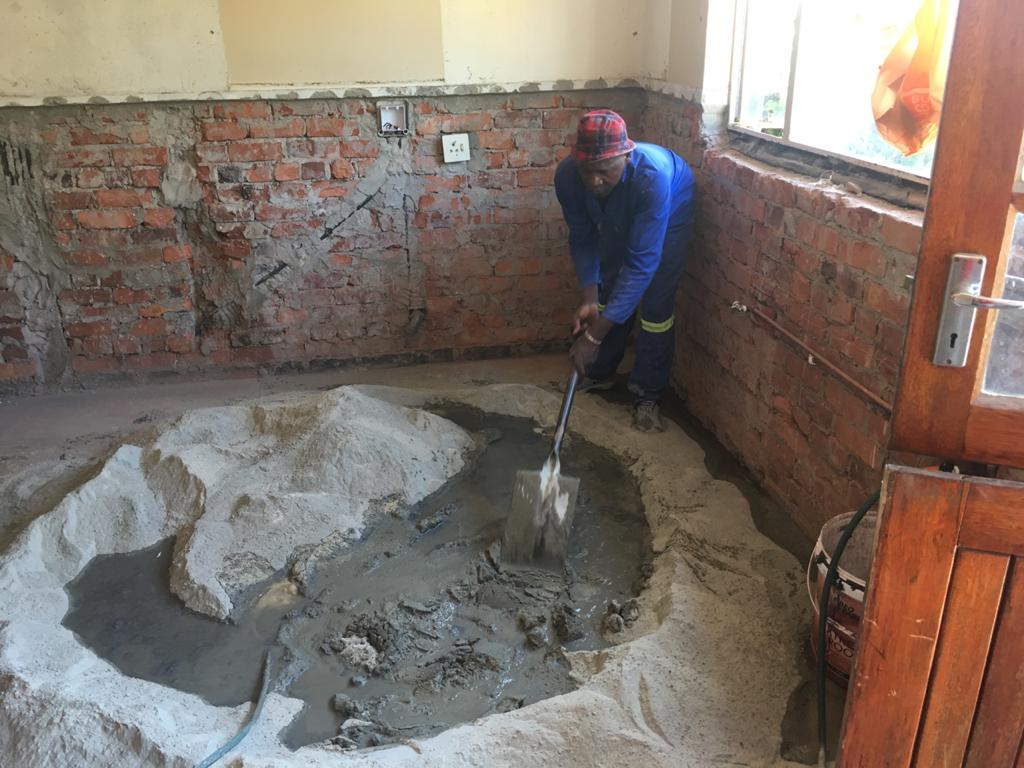 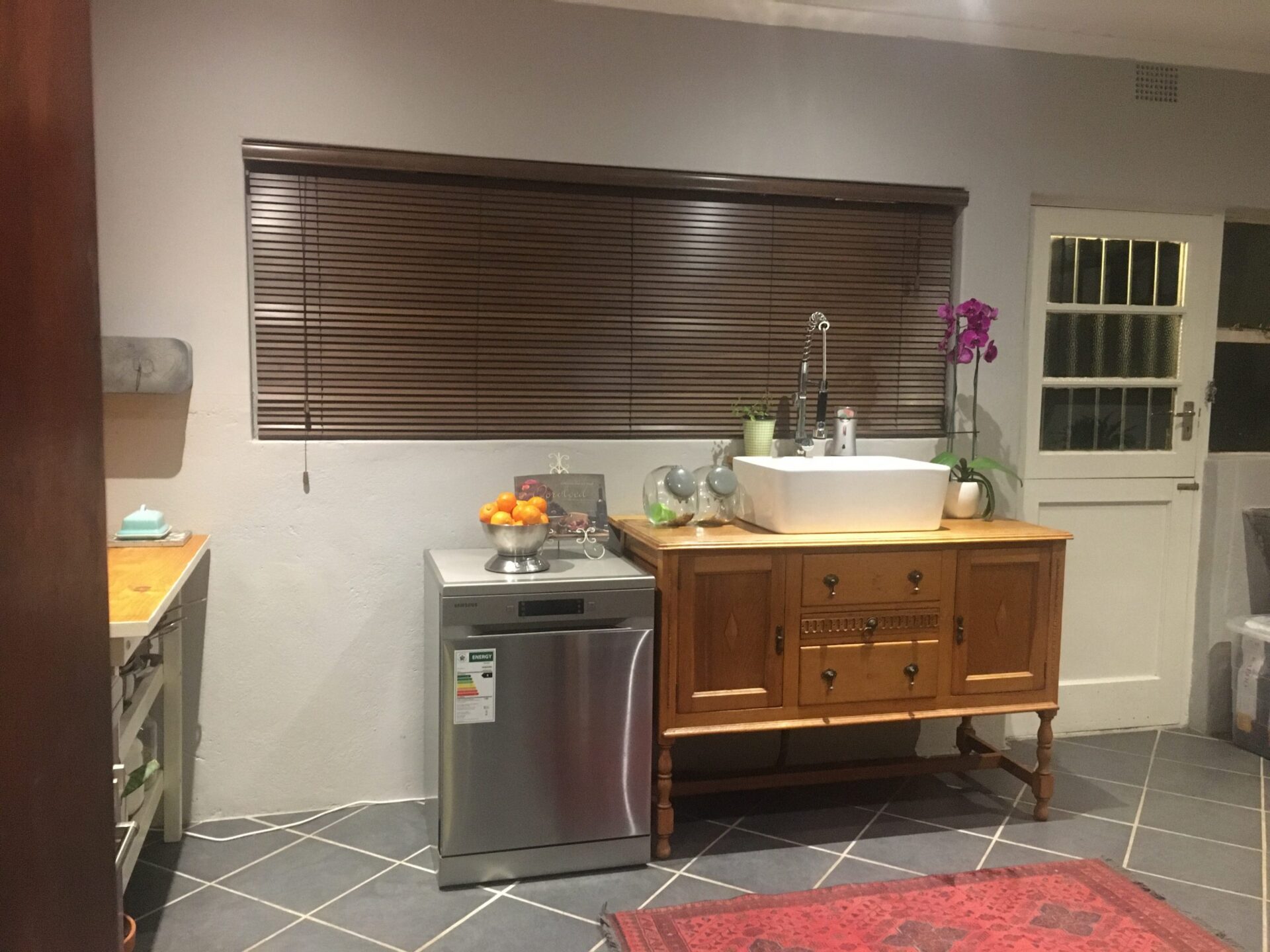 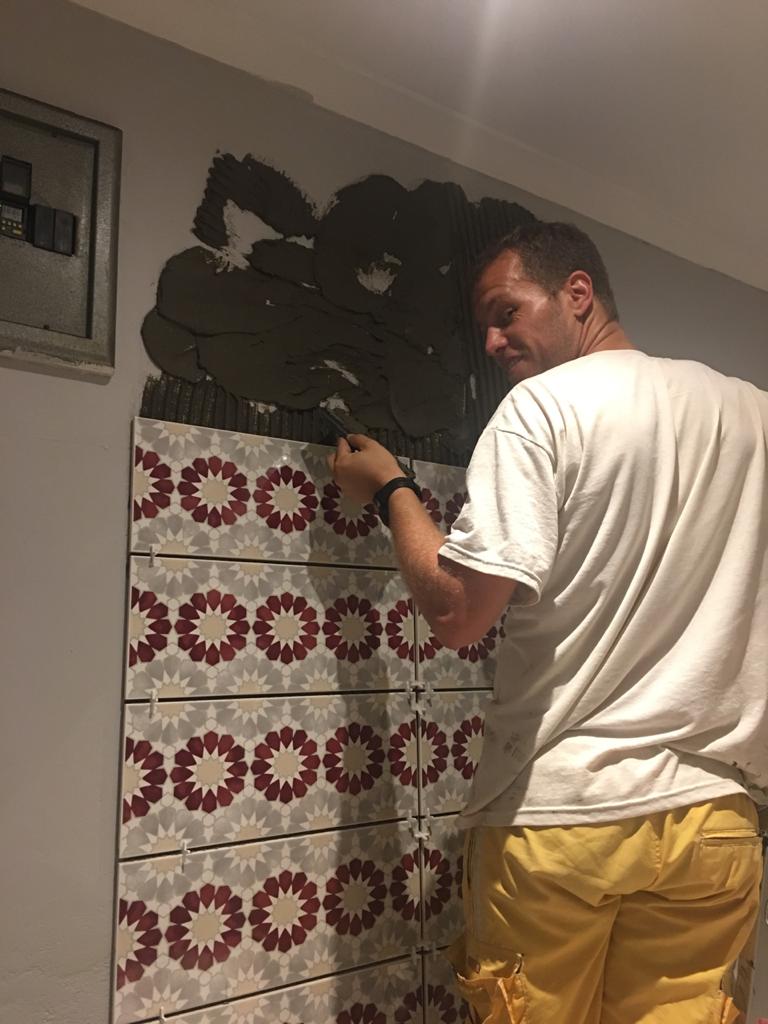 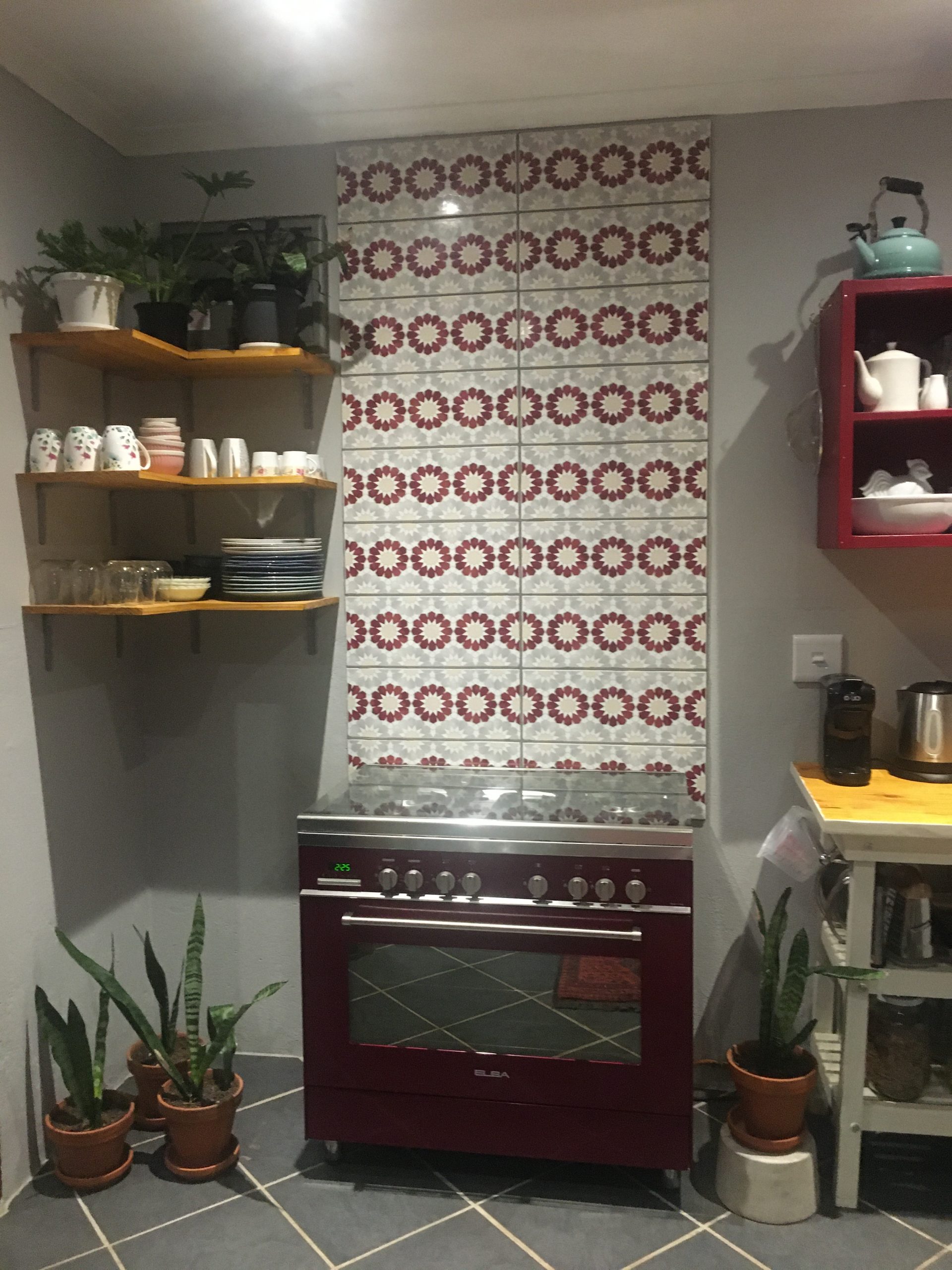 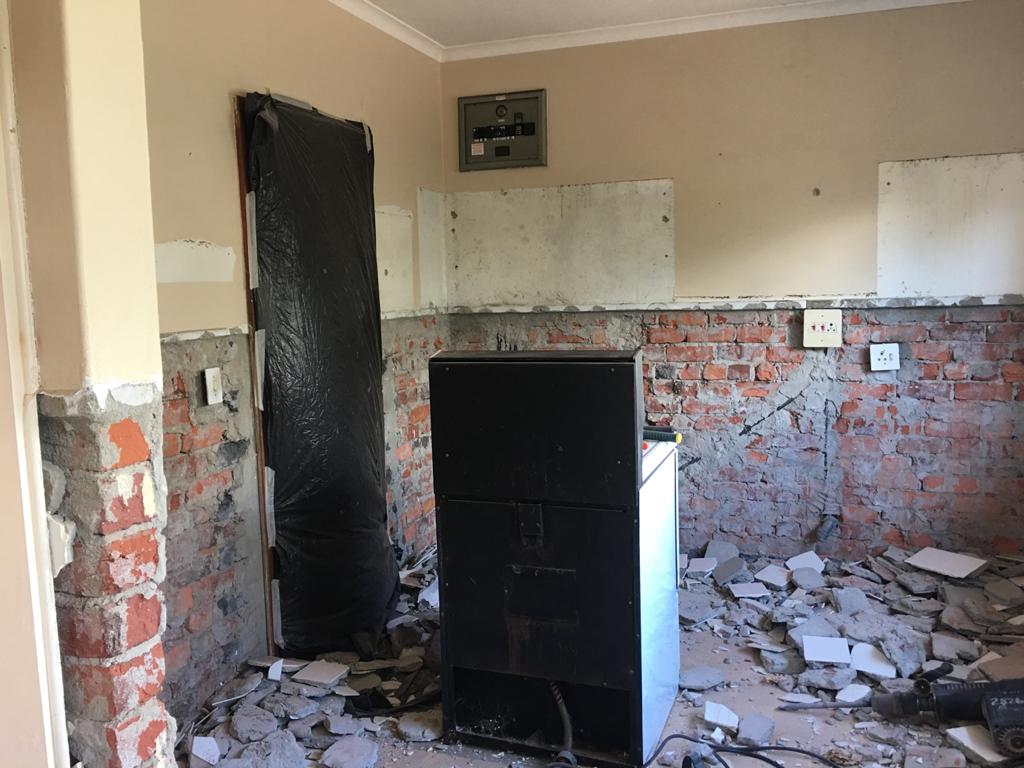 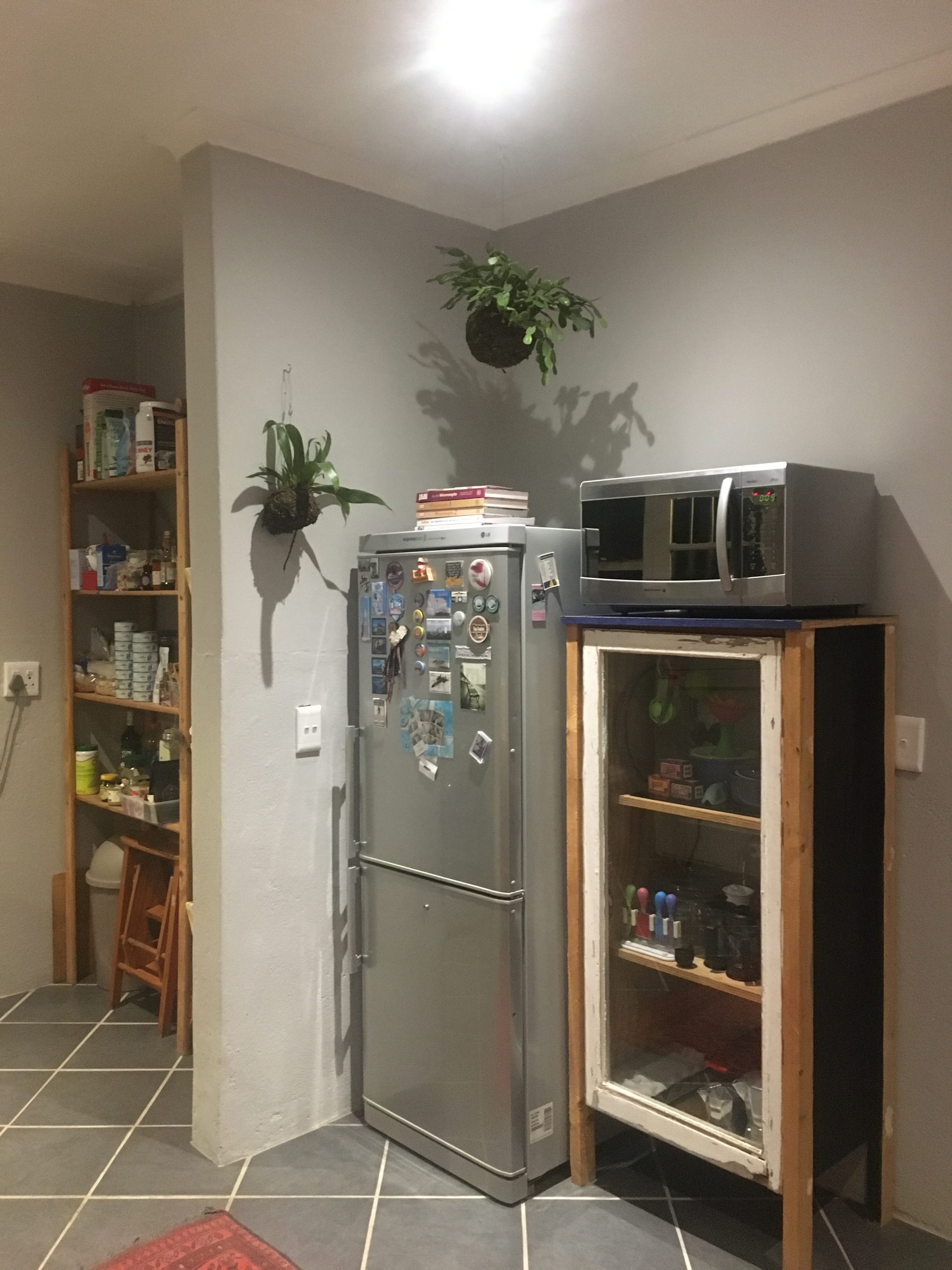 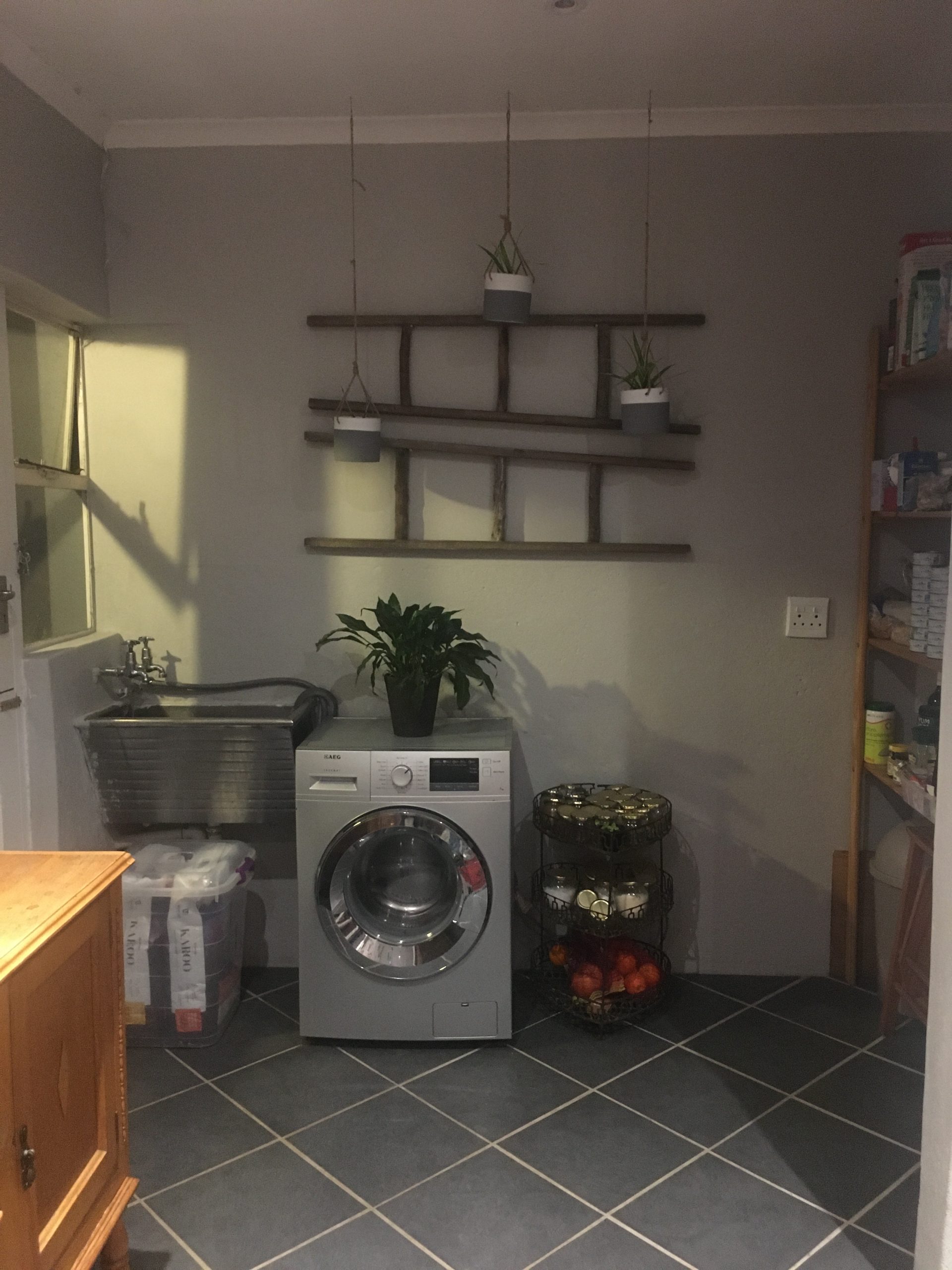 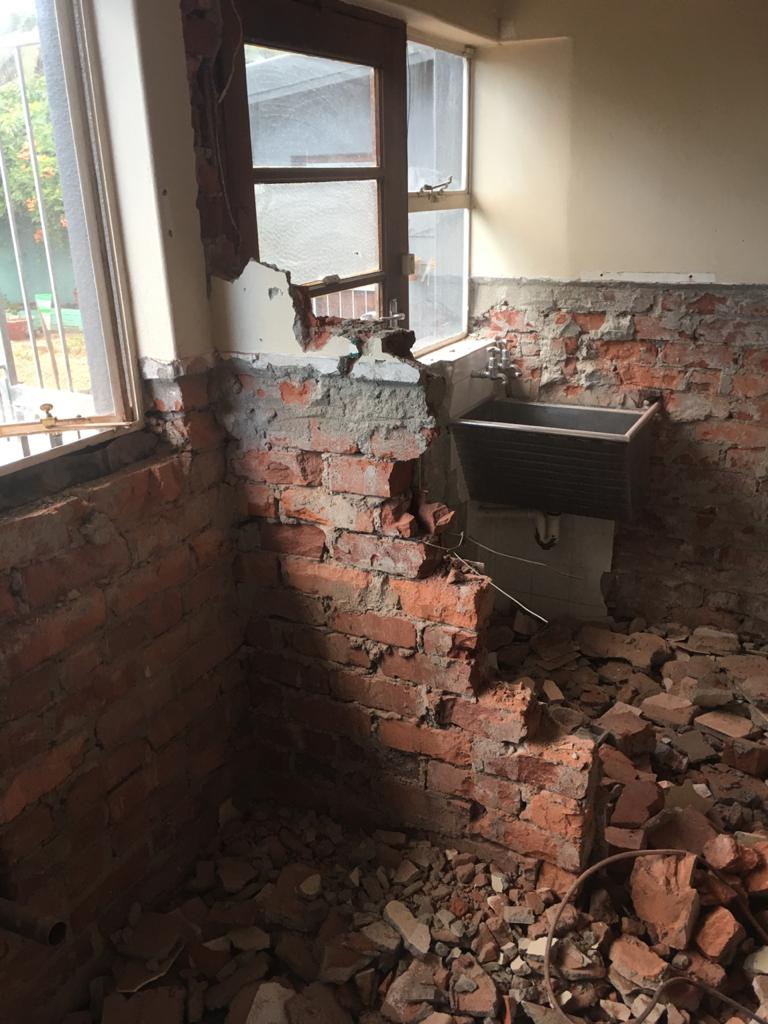 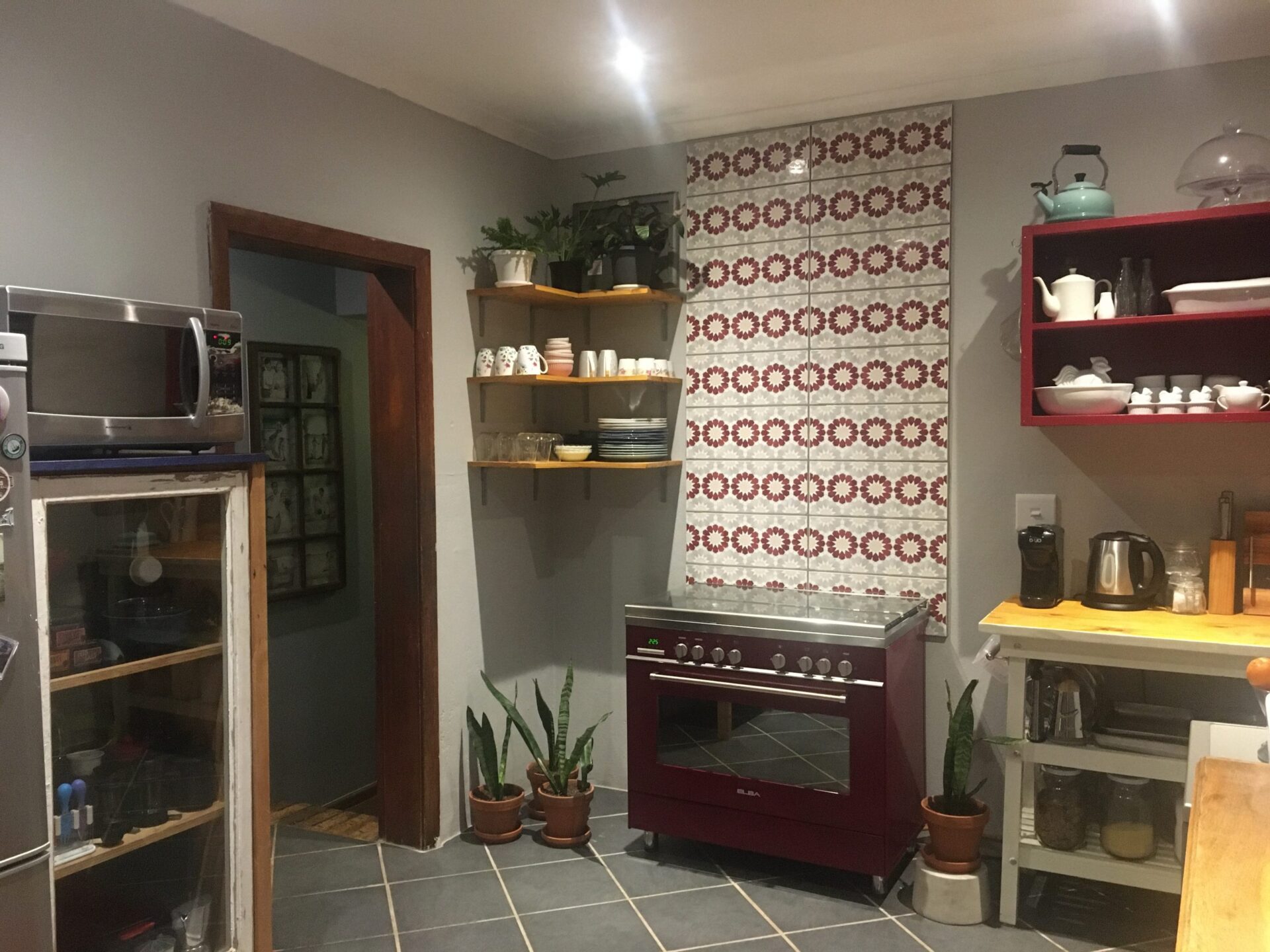