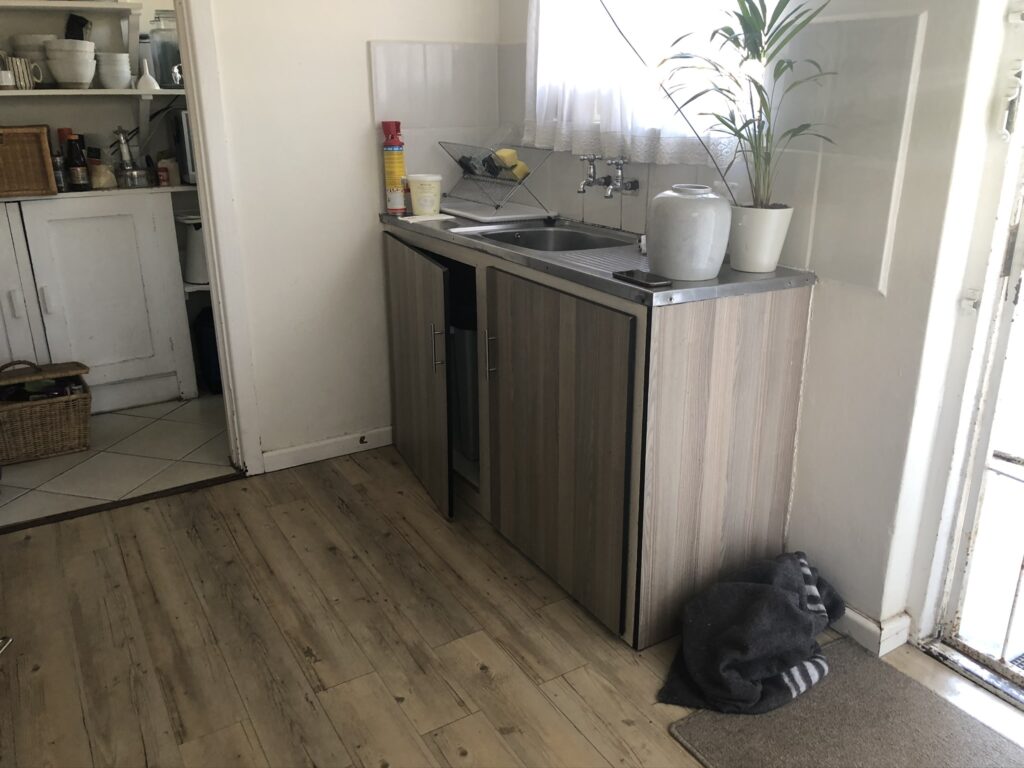 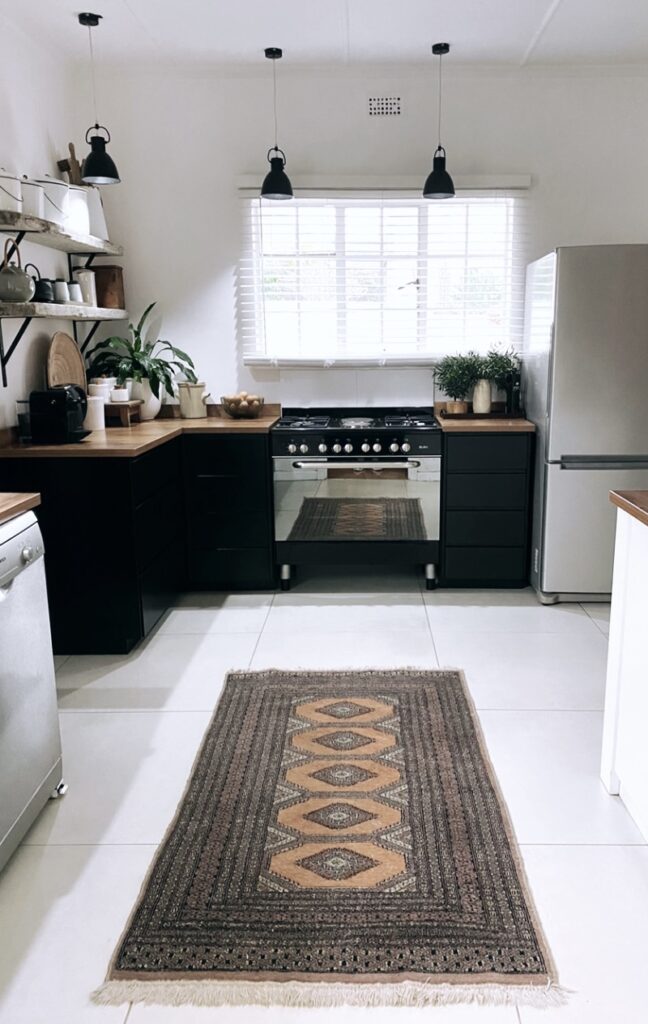 When we bought our home the kitchen had to be gutted and redone. Unfortunately nothing could be repurposed. The rotten wooden floor had been patched with old vinyl and the cupboards were falling apart. As with most old houses the kitchen was a four walled box with a pantry and small mud room off to…

When we bought our home the kitchen had to be gutted and redone. Unfortunately nothing could be repurposed. The rotten wooden floor had been patched with old vinyl and the cupboards were falling apart. As with most old houses the kitchen was a four walled box with a pantry and small mud room off to the sides. There was also an alcove leading into the rest of the house. We wanted to open it up onto the living area and bring it into the 21st century while still keep some of the old world charm of the home. I was selective about just how much opening up we would do and so opted to keep the mud room and pantry and turn the alcove into a walk in pot and crockery cupboard.
My husband did the demolition for us and we hired labour to brick up a doorway, neaten up and throw a slab where the floor had been as the floor joists had broken off. We were able to repurpose the floor boards in our guest bedroom fortunately.
I selected a small cabinet making business to build the island according to my design and the wall cabinets. I chose to mix the styles of the island and cabinets as I specifically didn’t want a very modern looking kitchen in the old home while still having the convenience of modern cabinetry. None of the cabinets except the sink cabinet are fitted so if I ever wanted to, I could rearrange the kitchen. I asked my cabinet maker to use painted wood rather than melamine or composite wood so that I can repaint in the future if I ever decided I’d like to change the colour. He was a dream to work with and was happy to accommodate my design ideas. We designed a drawer front with a hidden routed groove for easy opening as I didn’t want any hardware on the black wall cupboards. The counters are temporary as I still don’t know what I’m going to use. For now the cabinet maker made melamine tops with and a neat water proof trim. This was a very cheap option which as bought me time to decide on the final material. As I wanted the kitchen to integrate well with the rest of my style in the home I chose not to have eye level, wall mounted cupboards, but rather went with pretty open shelving made from reclaimed scaffolding planks. Thanks to keeping the existing walk in cupboards I’ve been able to hide appliances such as microwave and toaster out of sight.
Since I chose not to turn the mud room into a scullery I solved the dilemma of a great big double sink which would have been in plain sight, by installing a single, plastic trough with the idea that I could swap it for a double sink or porcelain trough if and when I needed to. I didn’t know if only one sink would work for me, but it definitely has and choosing this cheap, temporary option has, again, given me the time to decide what works for me and what I want permanently.
Kitchens are arguably the most expensive room in the house to upgrade, so I felt that I needed to be sure of what I wanted before spending. I’m so glad that I’ve taken my time on deciding about permanent counter tops and sink, I have a pretty, fully functional kitchen in the interim. 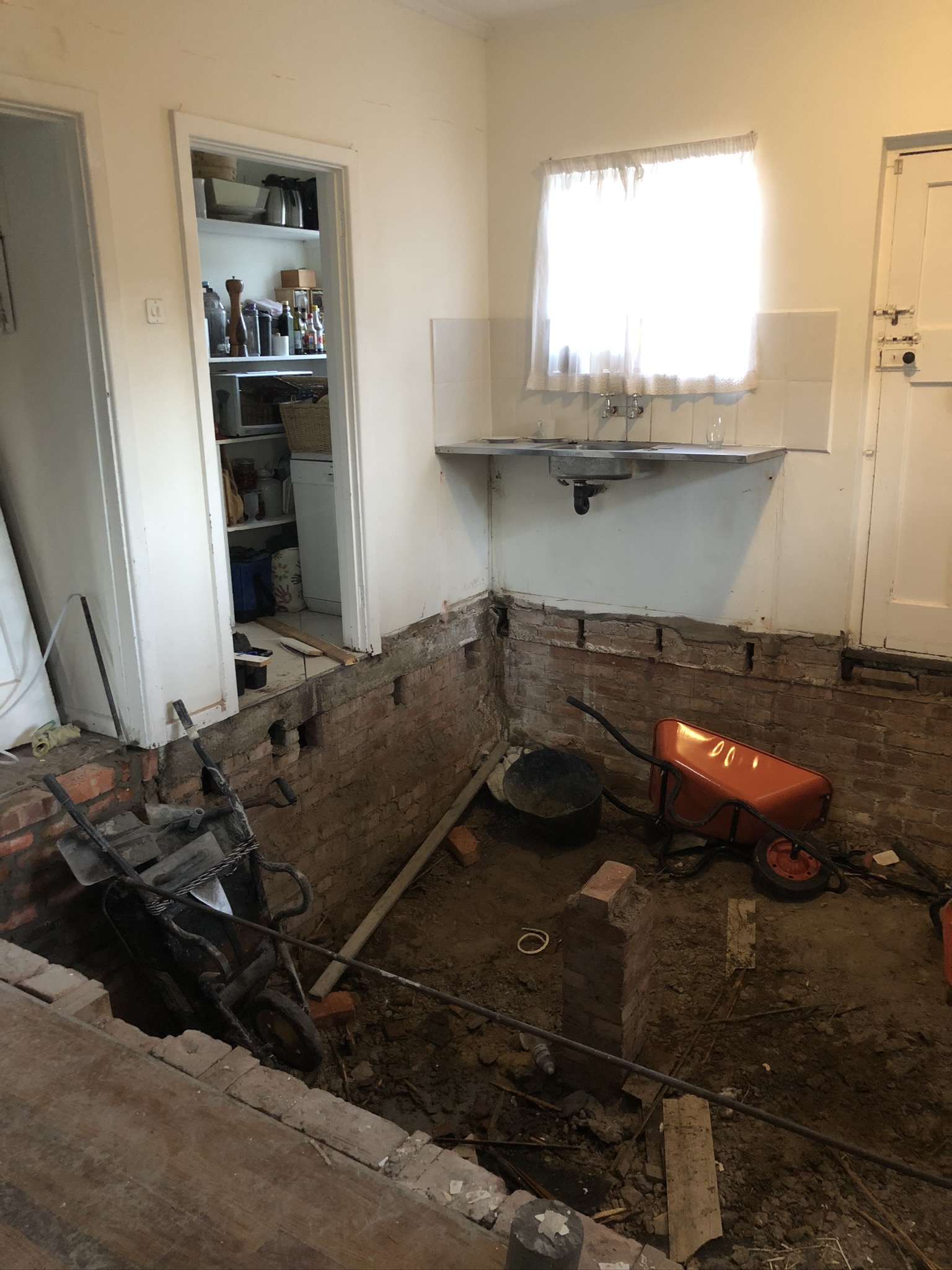 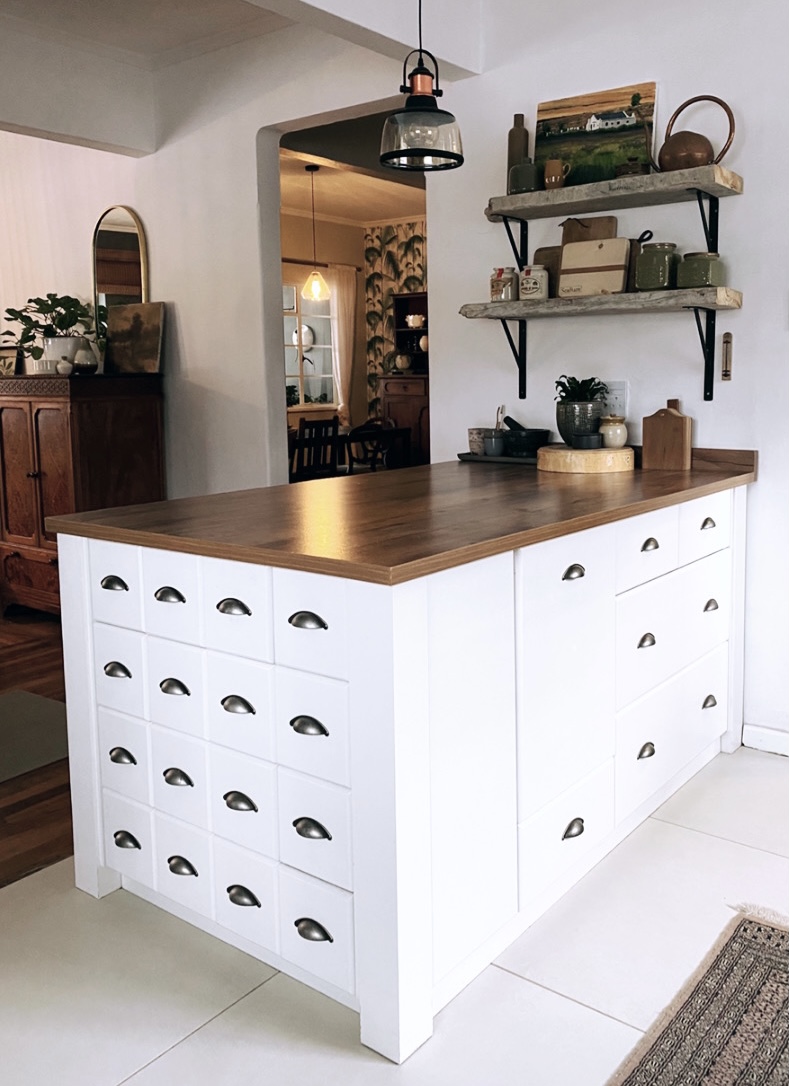 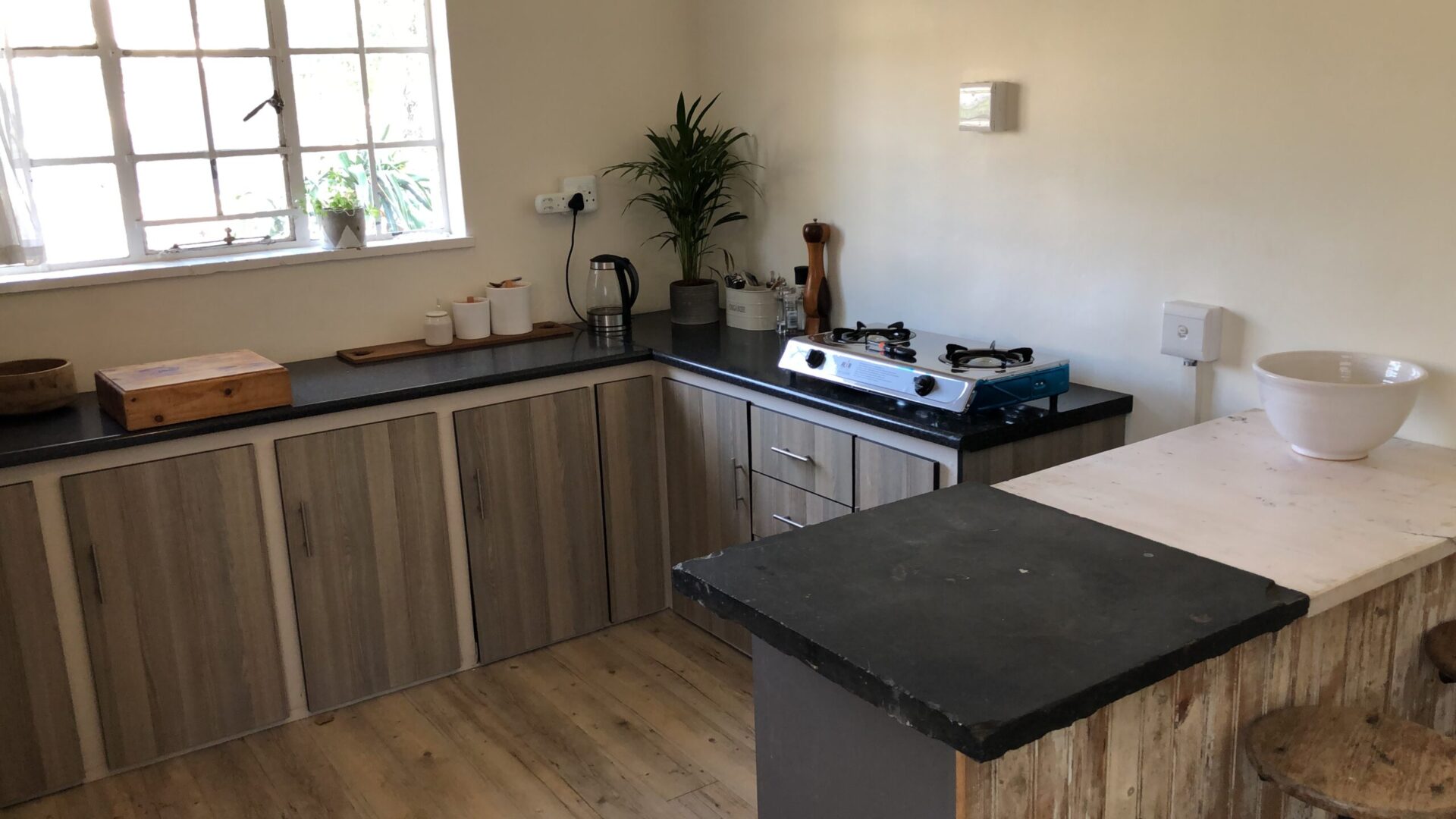 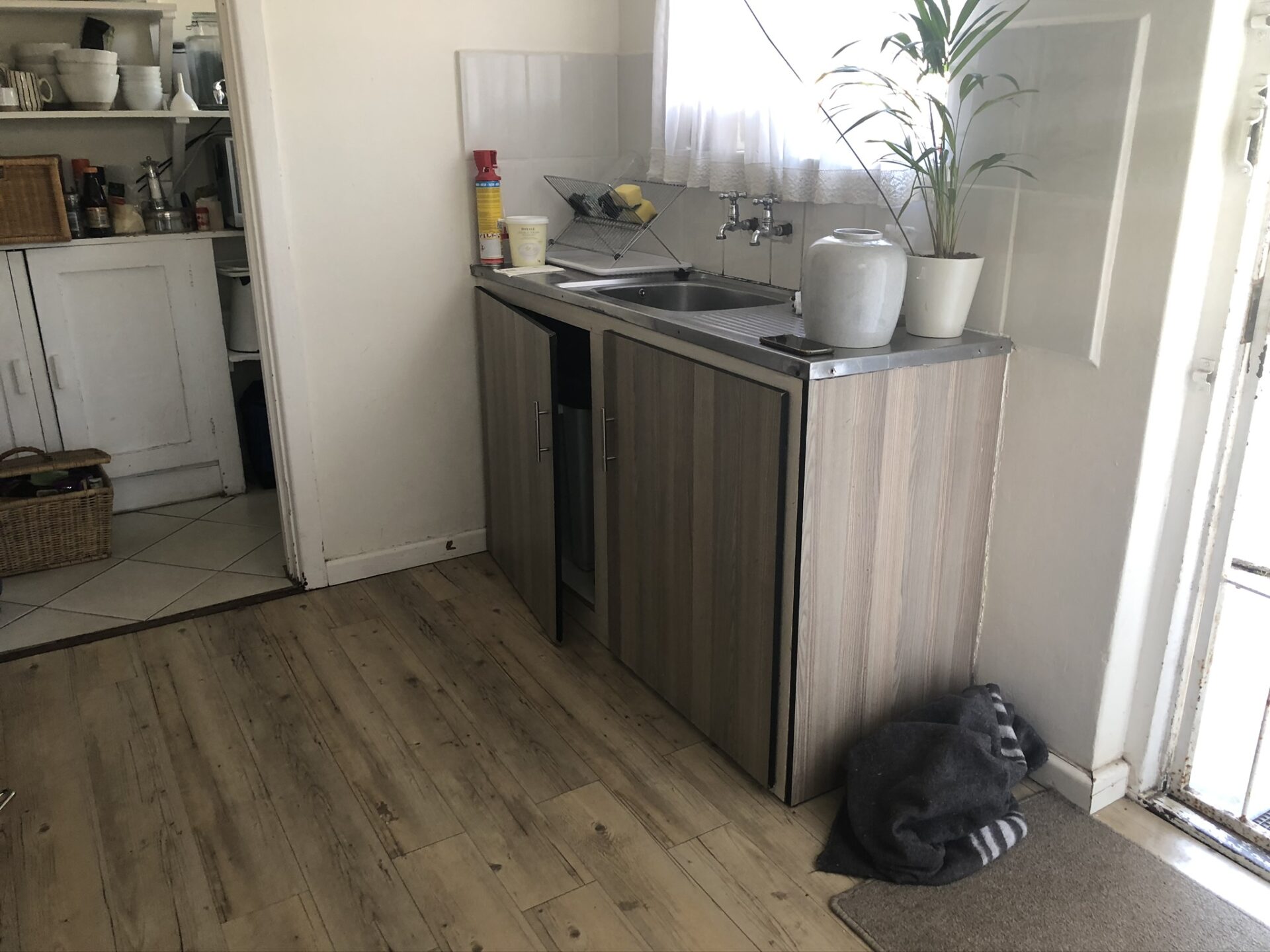 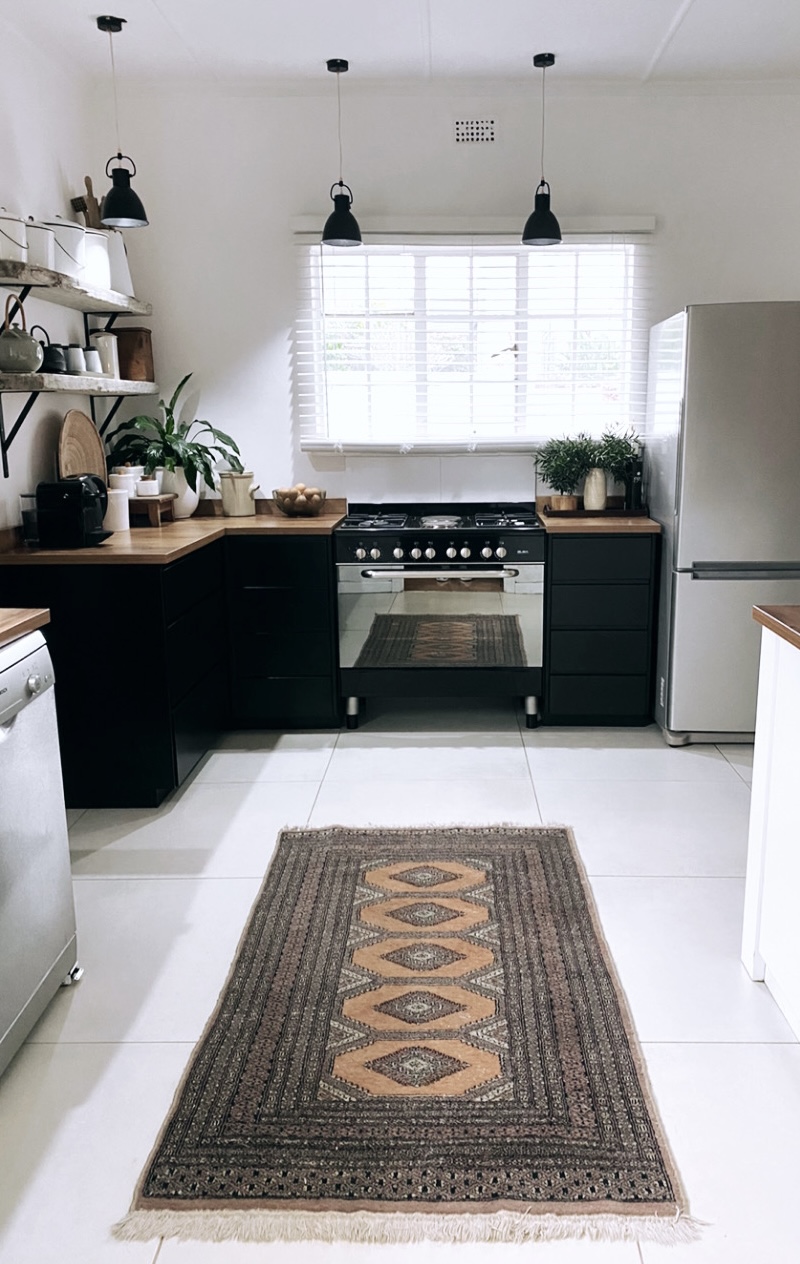 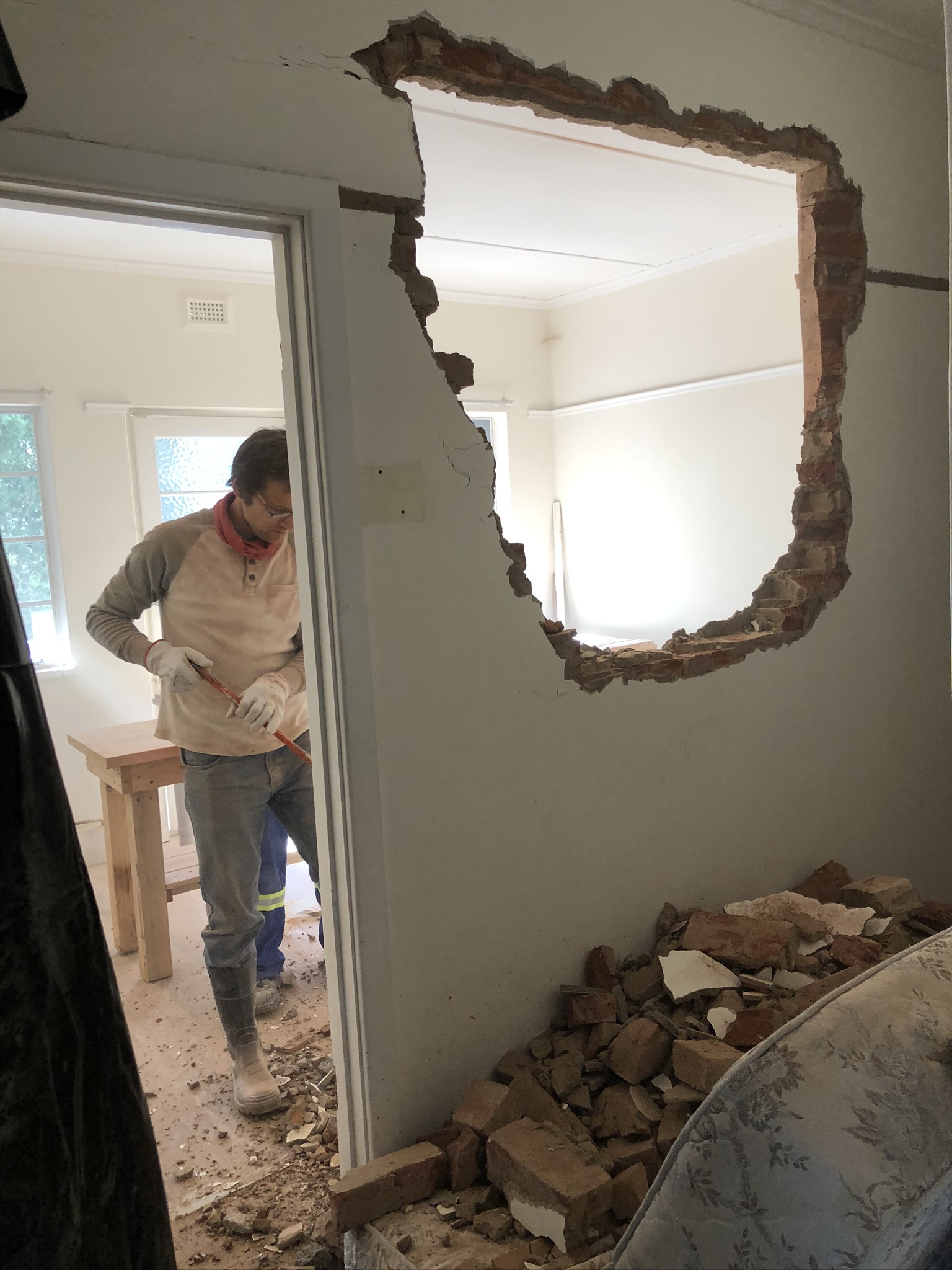 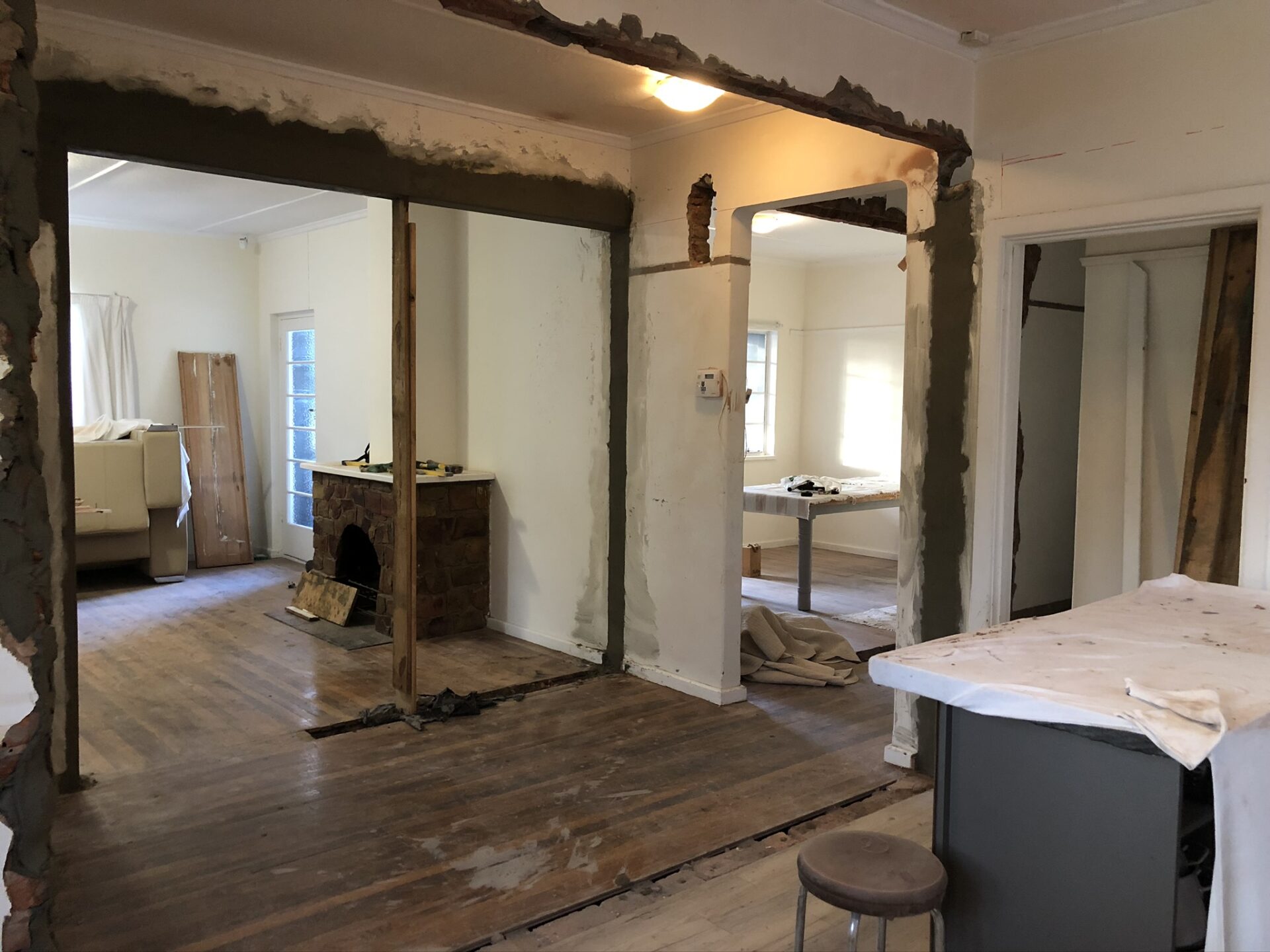 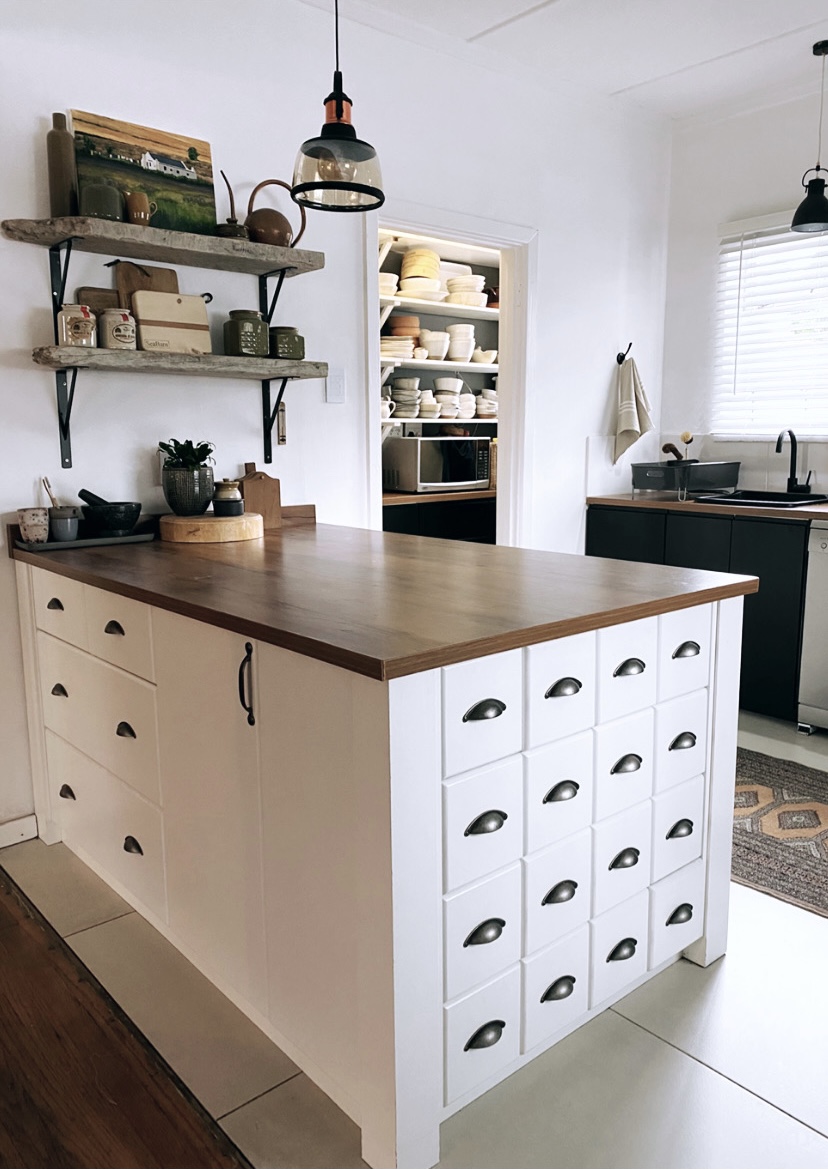 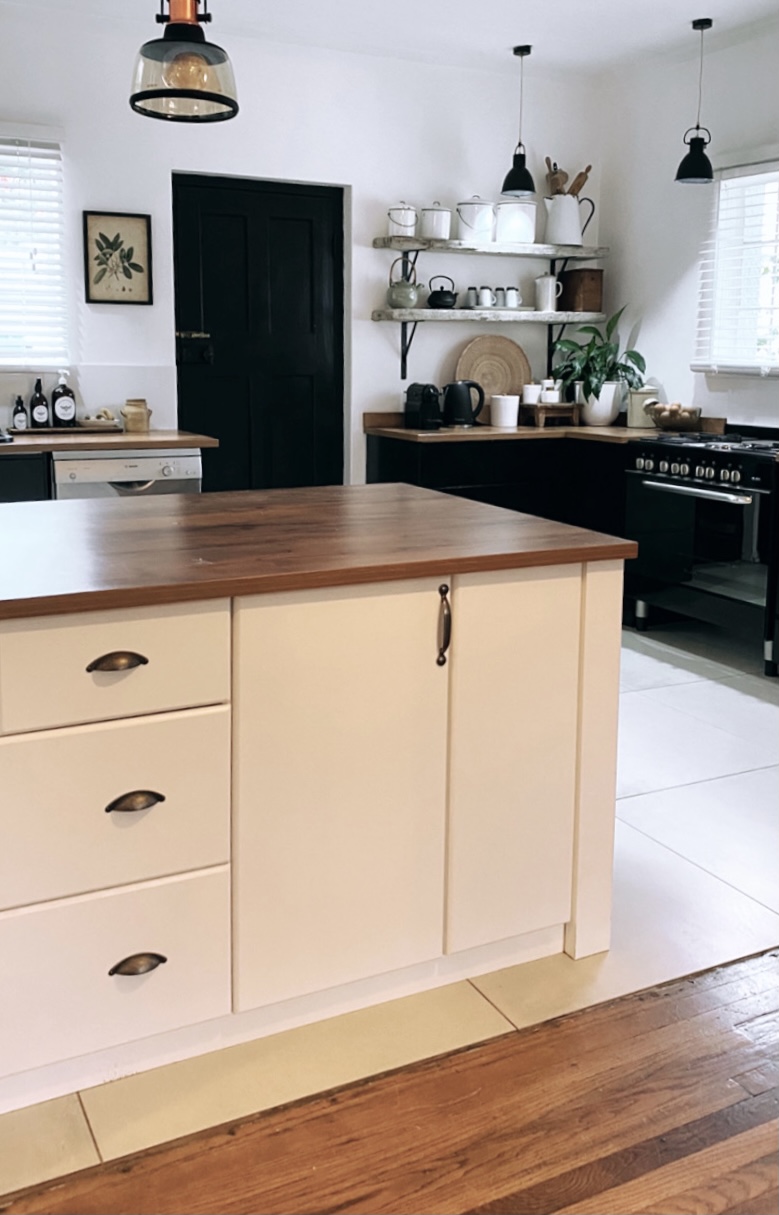 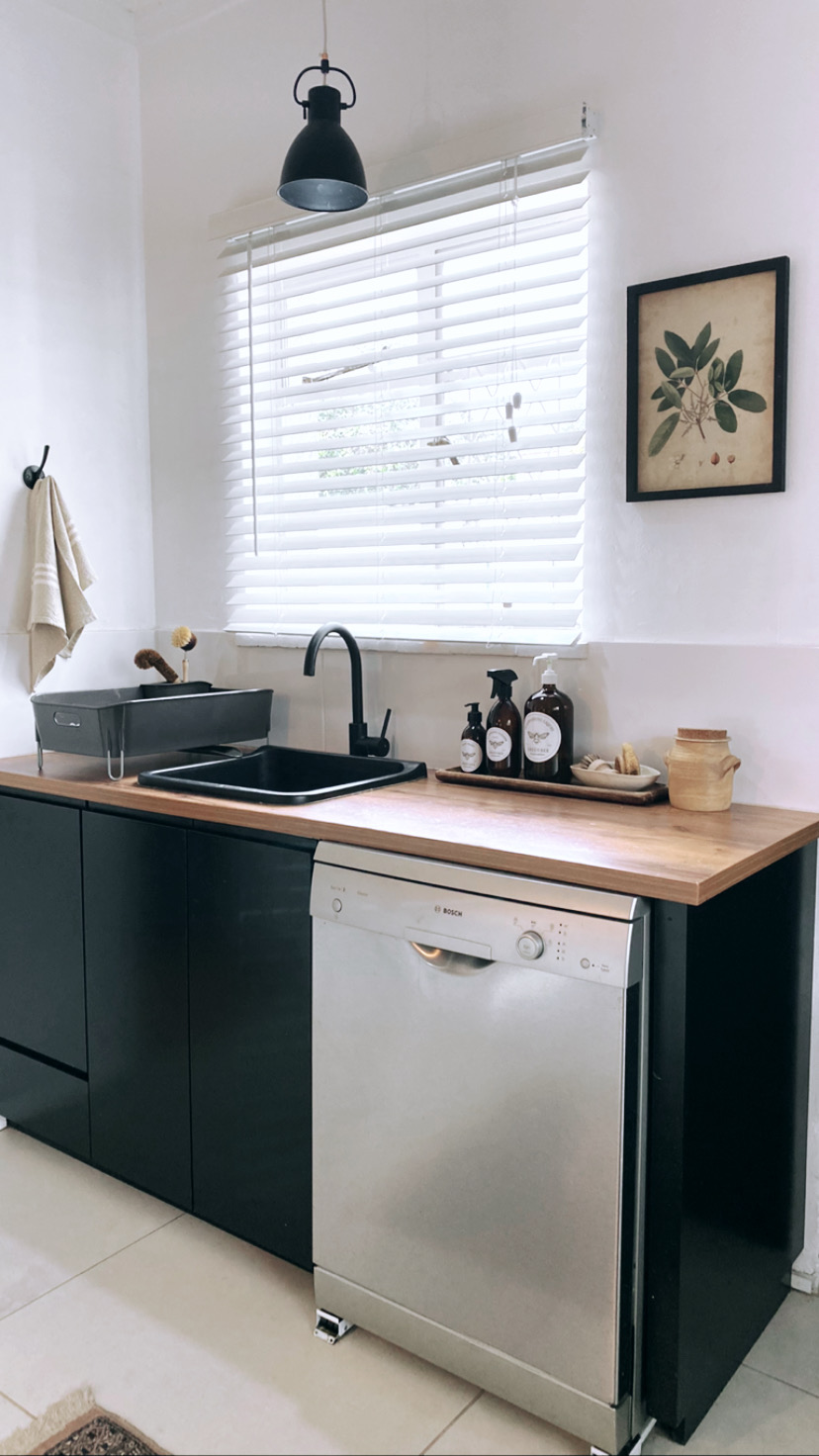 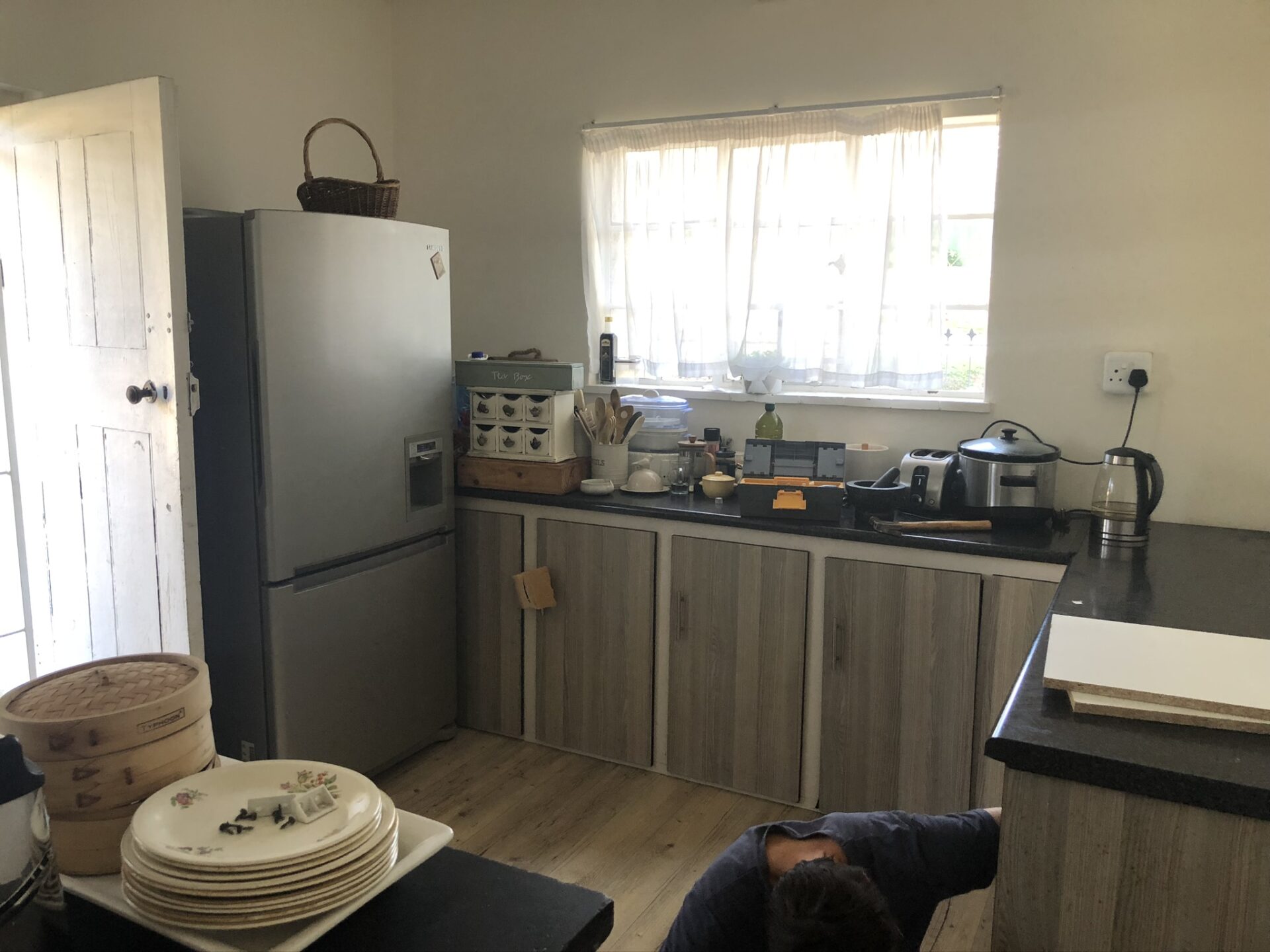 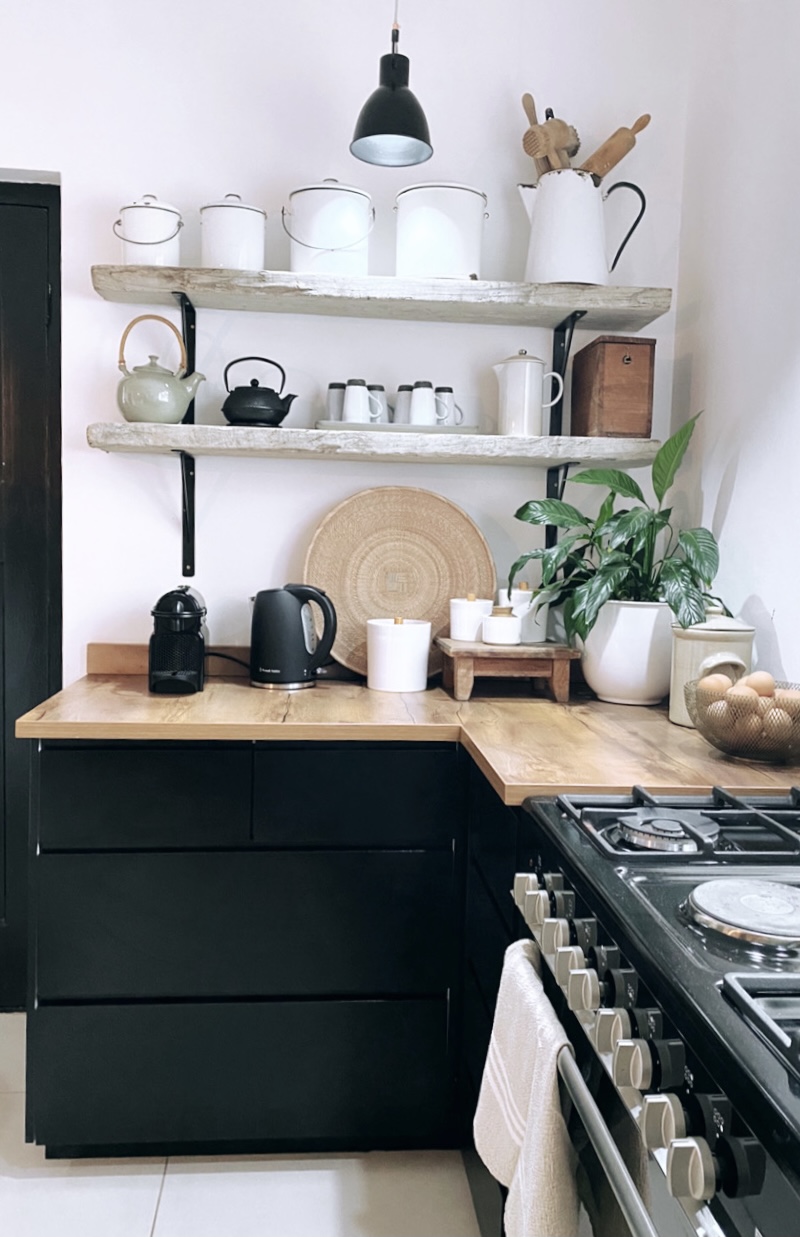