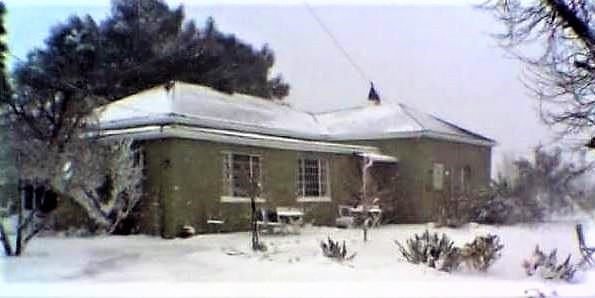 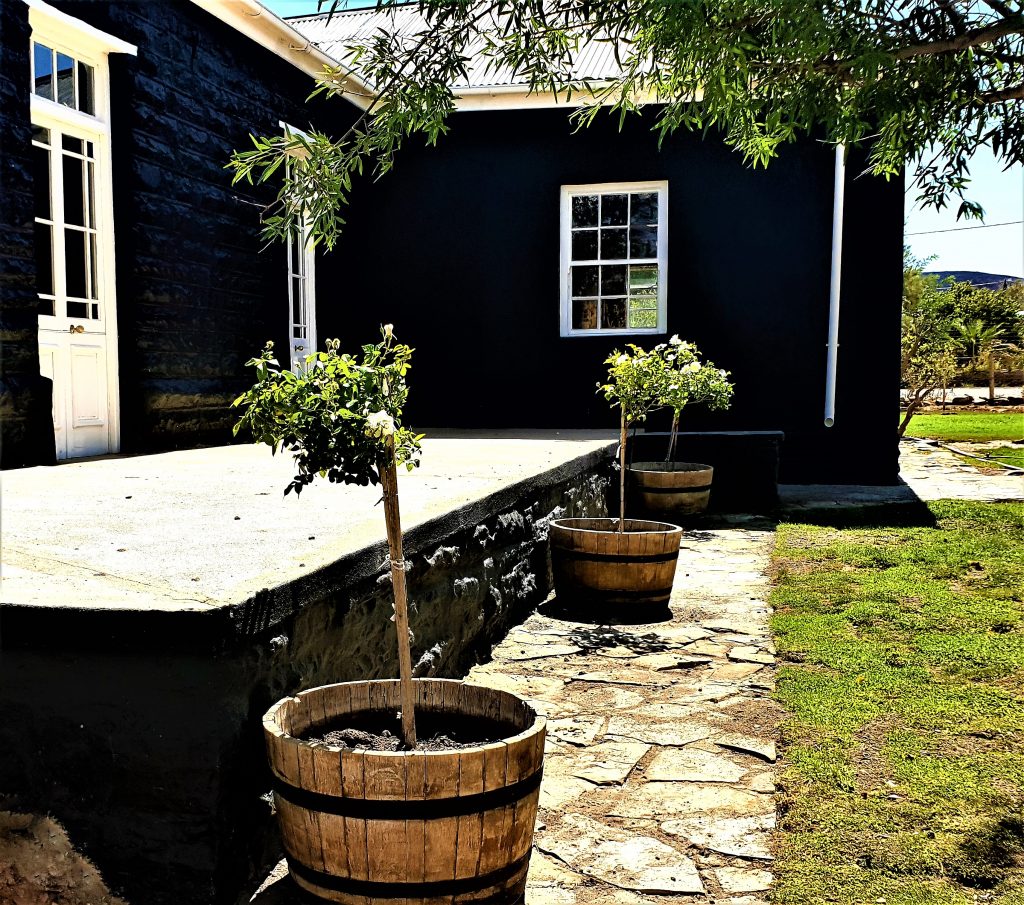 At the end of 2016, I decided that it was time to purchase a little house in the Karoo. Upon opening Property24, I found the house that I purchased on 7 January 2017 and named Die Heks se Huis. This 1905 property originally belonged to Honorary Viviers – the first missionary minister in Sutherland. In…

At the end of 2016, I decided that it was time to purchase a little house in the Karoo. Upon opening Property24, I found the house that I purchased on 7 January 2017 and named Die Heks se Huis.

This 1905 property originally belonged to Honorary Viviers – the first missionary minister in Sutherland. In 1908, the Dutch Reformed Church purchased the property from Honorary Viviers. Since 1908, this house has undergone various changes and also various owners. It has been a doctor’s office, a boarding house and a guest house.

The house was quite a dump when I bought it; it only had one small pine closet in the bedroom and a kitchen sink. There was basically nothing appealing about the property (and my mother was mortified when she viewed the house for the first time). The only things that appealed to me were the vision I had and the ‘feel’ of the house.

My Boerboel Voodoo and I arrived in Sutherland on 15 May 2017 and started cleaning the 2 141m2 yard. By 1 June 2017, I was ready to start the renovation project of the entire house as owner builder with my small construction company Witchy Worx Renovations, which consisted of myself and two local workers (a bricklayer and an electrician).

It took six months of living in dust with snow coming through the opening in the roof, trying not to freeze my butt off in the 8 degree weather, to get this initial demolition done.

We started by completely removing two inside walls to open up the area (which consisted of a bunch of small bedrooms and a small kitchen) to make a nice open-plan lounge / dining room / kitchen. All existing additions were demolished so that the exterior of the house would look like it originally did in 1905. The house is built from Karoo rock and we took out one entire exterior wall to build a large fireplace, and then rebuilt the wall, one stone at a time.

The kitchen was enlarged by breaking into an adjacent small bedroom, which doubled the kitchen in size. I always wanted a wood-burning stove in my kitchen, and found a Union #7 reconditioned stove in Wellington, which I transported all the way to Sutherland in the back of my B-class Mercedes… Poor car, but we got it to Sutherland.

The stoep was enclosed to create extra space during the olden days (estimated around the 1950s) and also to keep the cold out (as Sutherland is famous for its sub zero temperatures). As this house is basically a heritage site, the closure of the stoep should not have been allowed; we opened it up again. I contacted Woodstrippers in Wetton to make me two 2.8m-high happy doors (similar to what the original doors of the house looked like) and I also found some coloured glass at Hero Glass in Somerset West to give the doors the exact look of 1905. I carted these two humongous doors from Wetton to Sutherland on the back of my Hilux bakkie.

Once the lounge / kitchen area was finished, we tackled my bedroom and the spare bedroom and had large closets installed in each room by the local carpenter in Sutherland (Mr Jacques Augustyn). We also opened up the wall between the main bedroom and the bathroom to make it open-plan. The entire bathroom was gutted and a claw-foot tub was installed (purchased from Italtile in Somerset West, and also carted to Sutherland in a crate on the back of the Hilux). I found a great place in Somerset West called Brasique; they made all the brass and copper pipes and taps for me for the bathroom. The bedroom and ceiling were painted pitch-black with white chair-rails and the bathroom floor was finished with checkered black and white tiles. This was enough to freak the town folk out; first I call the house Die Heks se Huis and then I paint it black – a definite no-no.

Anvil Kraft in Salt River installed a very rustic kitchen for me; it consisted of reclaimed wood / piping / a farm-style sink and a number of old soda crates on sliders as drawers. The kitchen was completed at the end of November 2017.

This has been an ongoing project for the past three years. It is a wonderful house, with a great eclectic feel. Originally, it consisted of four bedrooms with four bathrooms, a small kitchen and scullery with a sunroom and an enclosed stoep. After the renovation, the house now consists of an open-plan lounge / dining room / kitchen, two bedrooms (each with an en-suite bathroom), and a large sunroom/family room which I use as an office and also as my studio where I paint.

Still on the bucket list to do at the house is tiling the kitchen floor in black and white and putting a bullnose roof on the stoep. 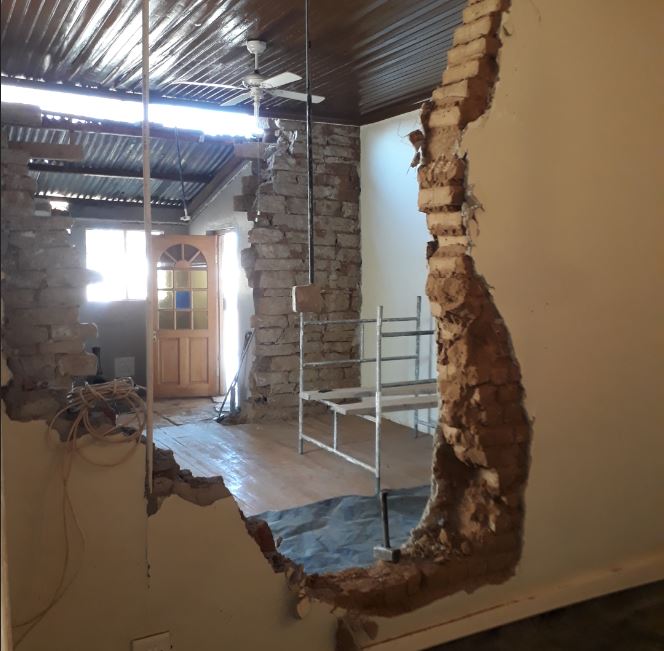 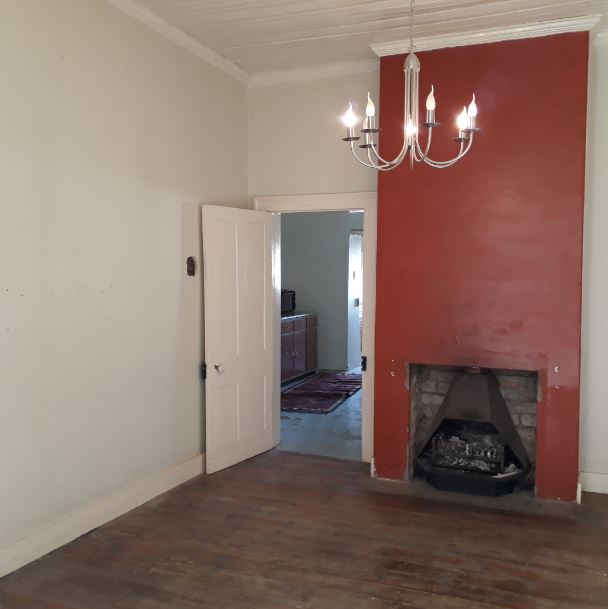 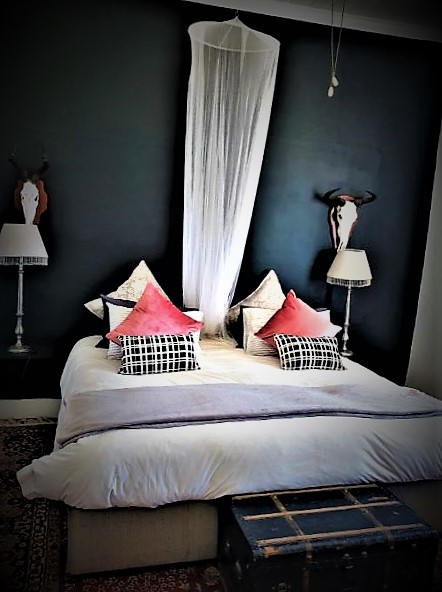 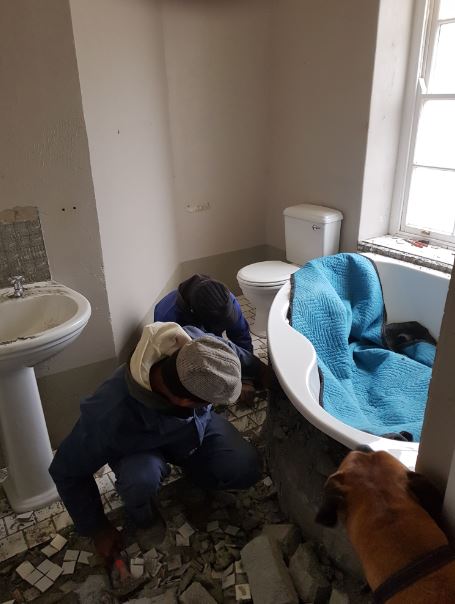 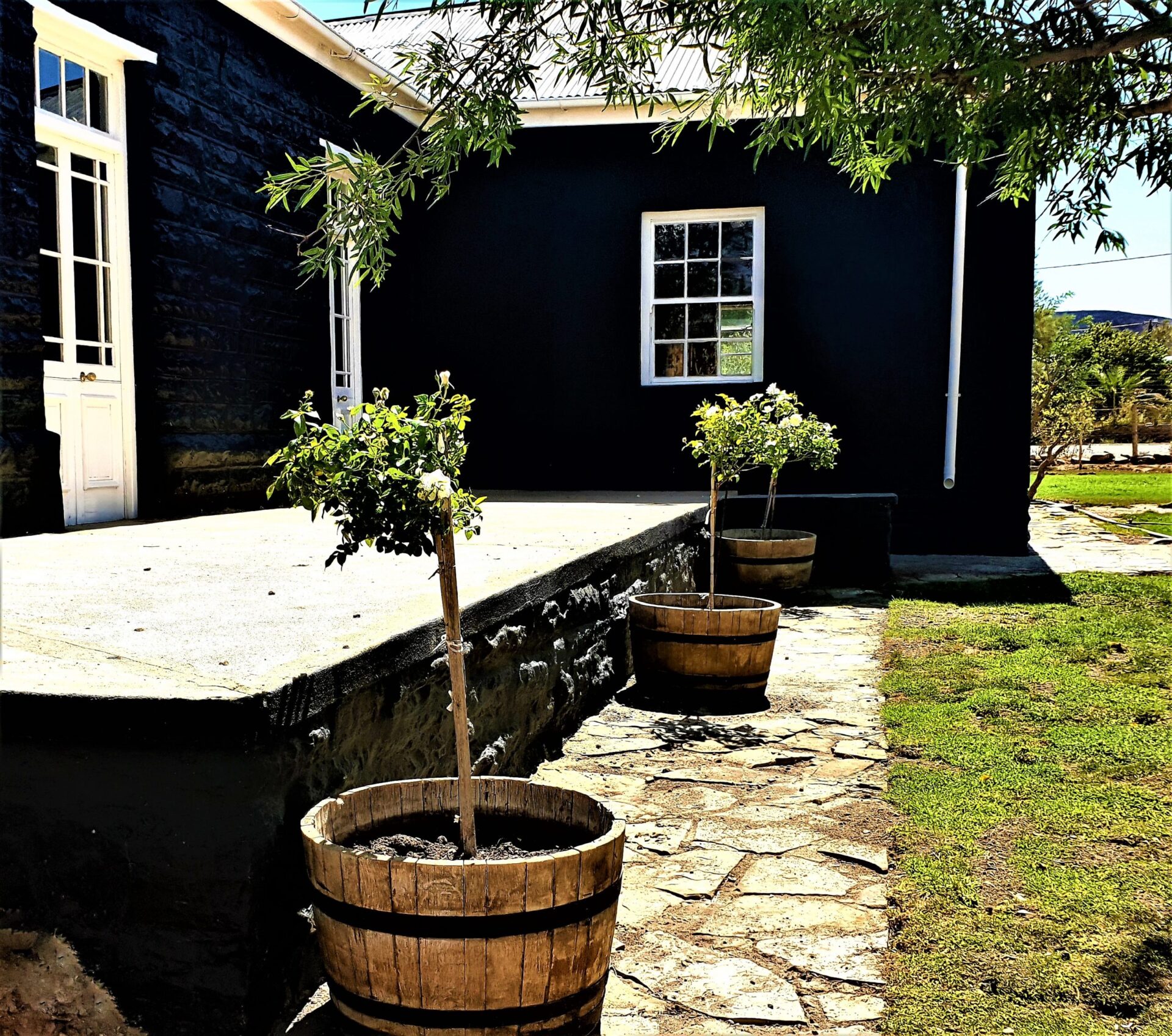 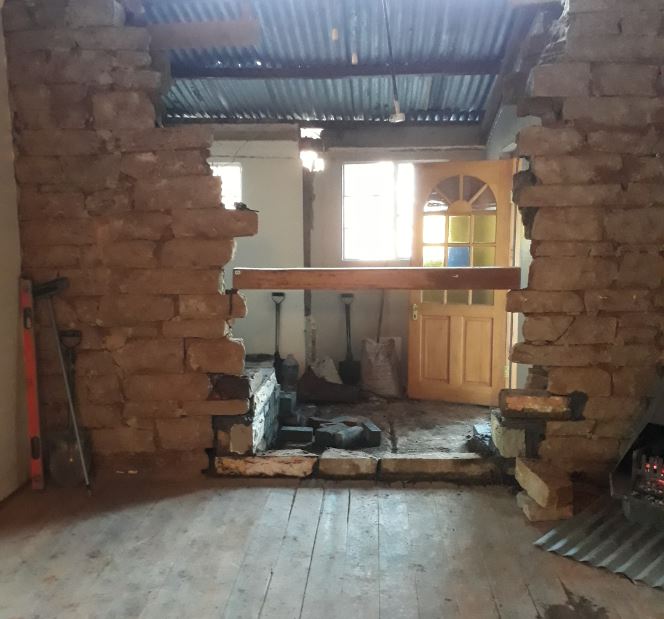 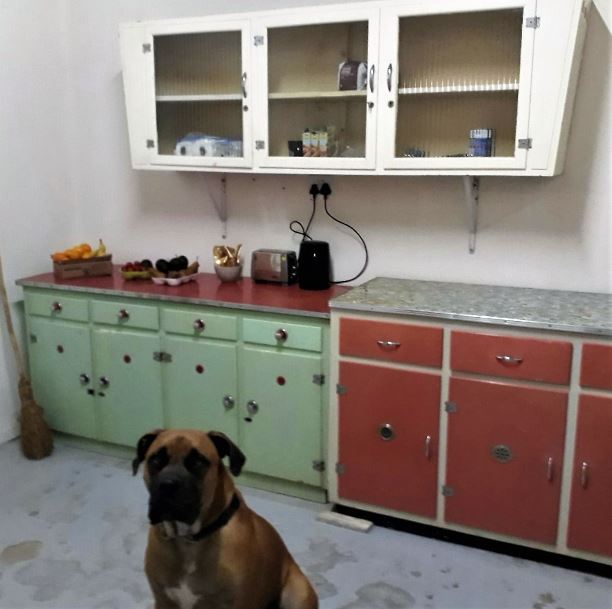 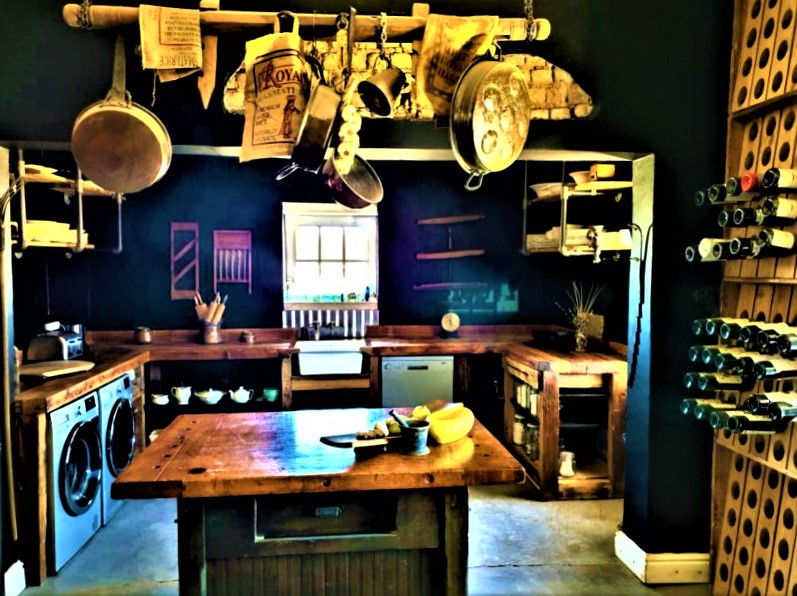 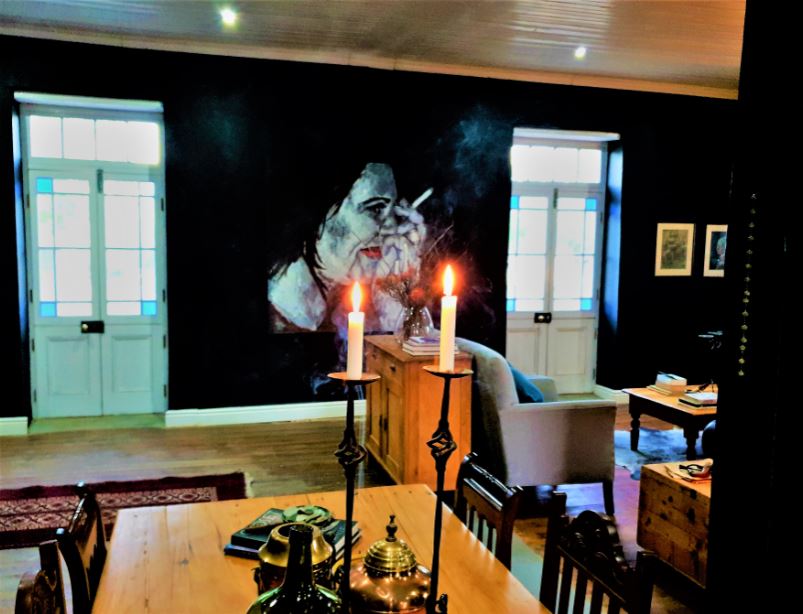 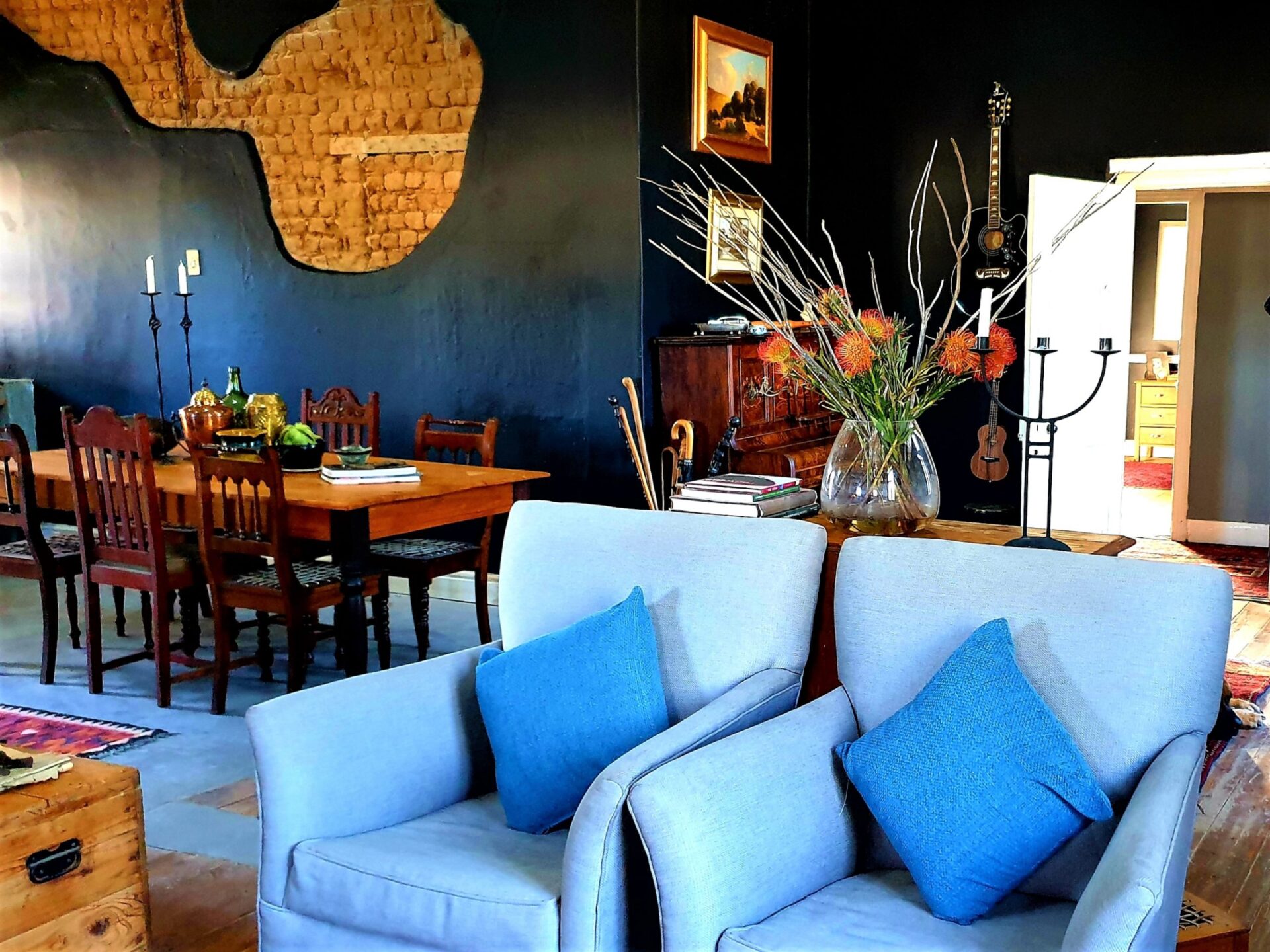 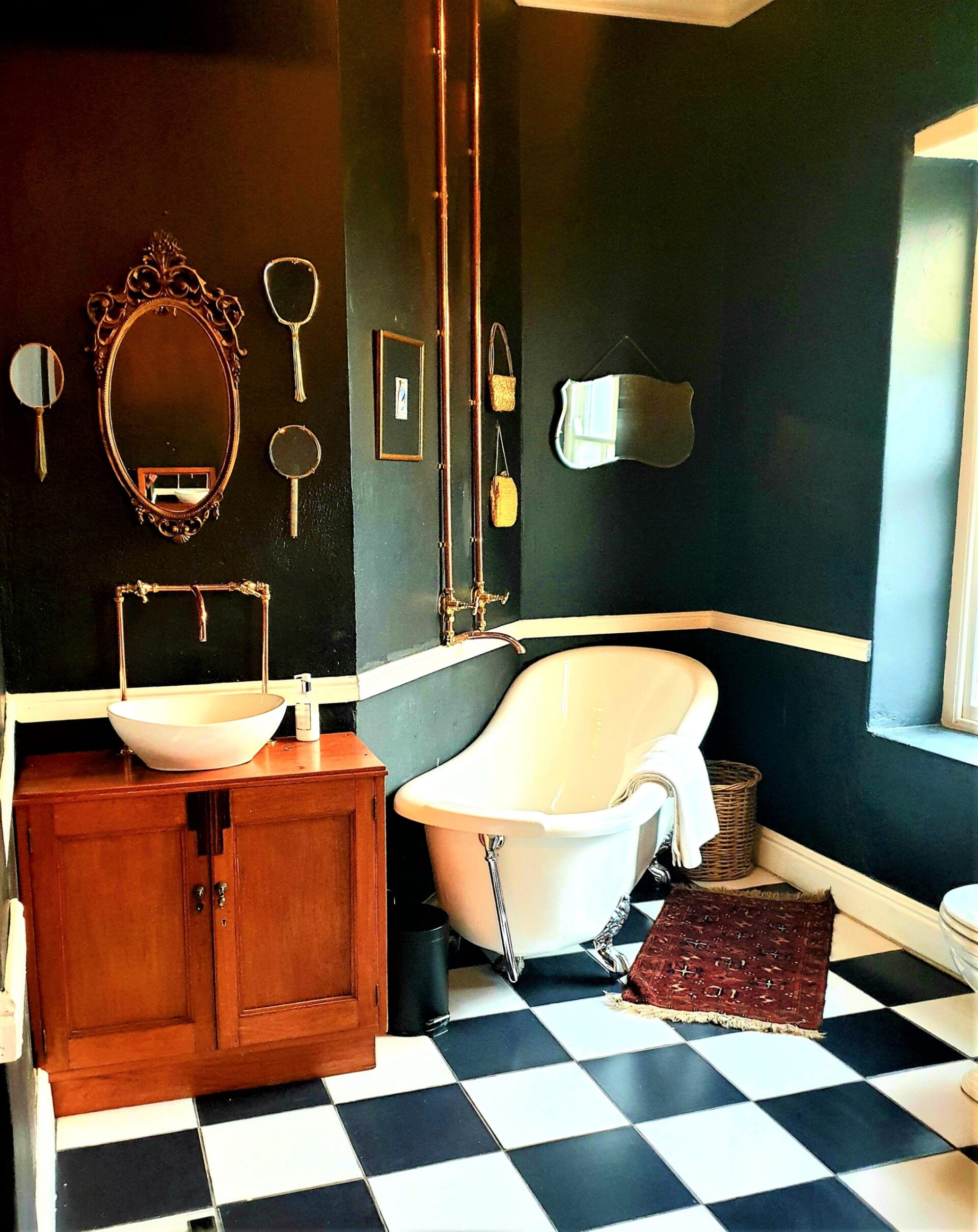