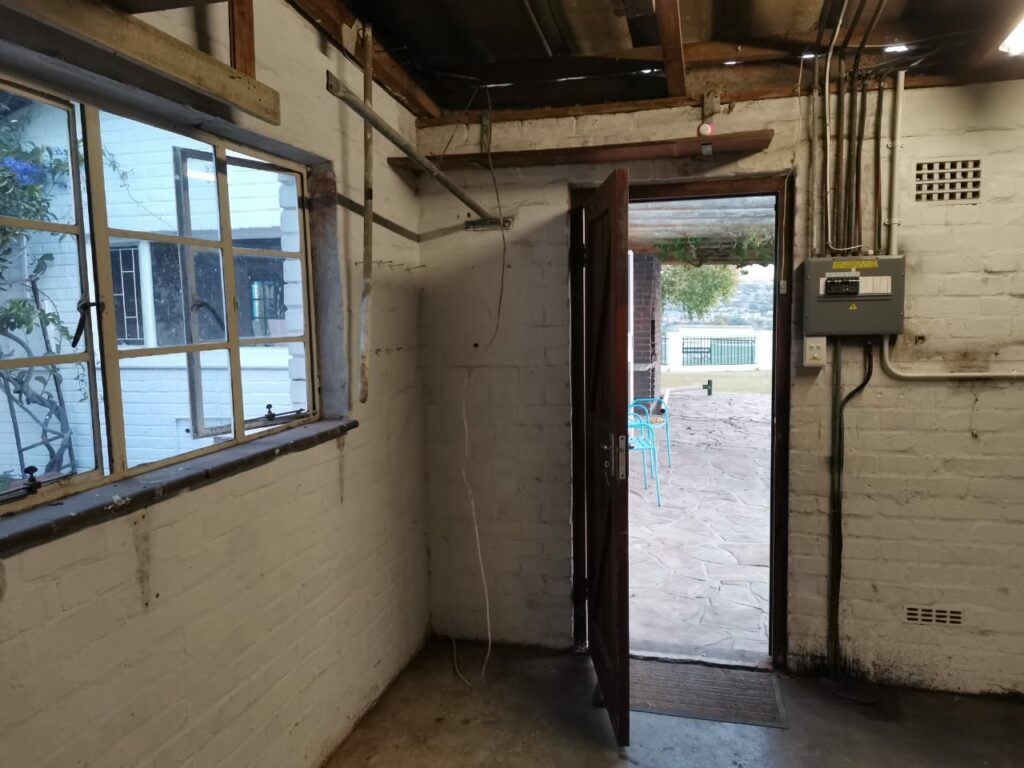 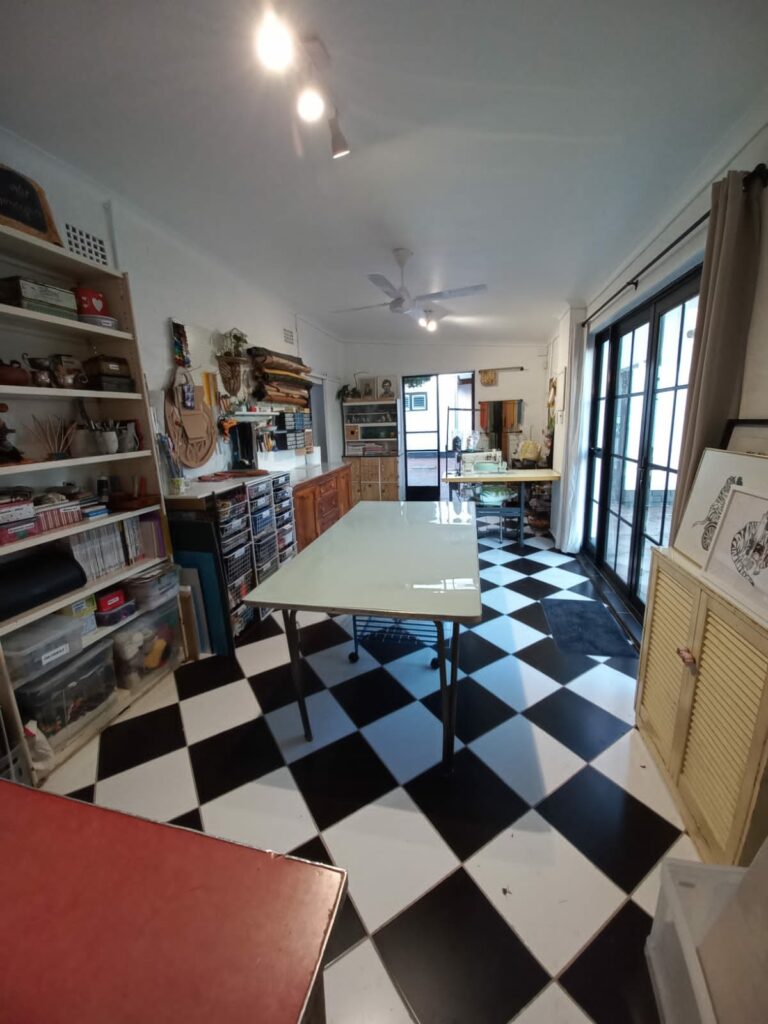 What used to be a musty, cobweb-ridden tandem garage has been transformed into a bright and much-loved studio, playroom, office and storage room. Previously, our tandem garage was under-utilised and filled with random garbage. It was also dark, and from outside the building was unassuming and uninviting. Generations of previous owners had left their marks…

What used to be a musty, cobweb-ridden tandem garage has been transformed into a bright and much-loved studio, playroom, office and storage room. Previously, our tandem garage was under-utilised and filled with random garbage. It was also dark, and from outside the building was unassuming and uninviting. Generations of previous owners had left their marks in the form of randomly placed nails in the wall, self-installed shelving of various types (and angles!), and exposed electrical wiring.
Meanwhile, my fledgling leather and linocutting business required space to grow, our young daughters craved a playroom of their own and my husband needed an office.
Our first step was to break open wide double doors onto the garden. This tied in with the front stoep of the main house, and creates an inviting courtyard effect. The small window which looked onto the courtyard was replaced by vintage steel double doors salvaged from another project of ours.
We separated the space with drywalling into a store room in front behind after a newly installed roller garage door (chosen to save space) a play room and a studio space. The old domestic quarter was divided into a new office and a small laundry room. We also installed ceilings and painted it all a bright white to make it feel bigger. The whole building was rewired, and every odd nail, pipe and shelf was taken down (some of them had to be grinded to the level of the wall). And, just because I absolutely love it, everything was tiled in black and white which makes quite the statement.
In the store room, we placed shelving systems and organised a lot of our stuff into crates which makes it easy to access – for example, when we go camping, we just grab the camping crate and we’re good to go!
For the play room, we let the kids choose a fun chandelier. An old room divider bookcase handed down from my parents as well as other cabinets were placed on the walls and packed with their books and toys. We also used hooks to allow them to hang their bikes, doll prams and umbrellas.
The highlight of the space is the studio. This is divided from the playroom by the old front door of our house, now painted black. In the studio, I utilised pegboards with hooks, shelves and other clever designs to ensure that all my tools and materials are immediately accessible. I kept argonomics in mind with the height of all the working surfaces and also designed the space around the manufacturing process to allow for a smooth operation. With the eye on hopefully being able to host workshops in the studio in the future, I found a huge table around which everyone who attends will be able to create. Because the studio has a western window, a ceiling fan was installed.
What I love about the layout is that I can create my products and artworks – and no matter where I am in the studio, I can keep an eye on the girls playing in the garden or their playroom. At the same time, when I receive a client, it’s great that the space allows us privacy and keeps the business away from the home.
For the office, my husband chose the space ship from the Tintin series as inspiration. I sourced a retro lampshade, cool sixties desk and bright red tulip chair. We also found a tall midcentury bookshelf for all his books and documents. The office also hosts our tea and coffee corner – because you can’t get the good work done without a good cuppa!
Another nifty little plan was to use the tiny entrance hall to the building, which became redundant after one of our new doors was placed, as a laundry. We used the tall bookshelf to separate it from the new office and placed the washer, dryer and all cleaning appliances there – again making use of shelving systems to stretch our space.
All in all, we are getting a whole lot of living from what used to be a dusty old garage and we can’t imagine our house without this space! 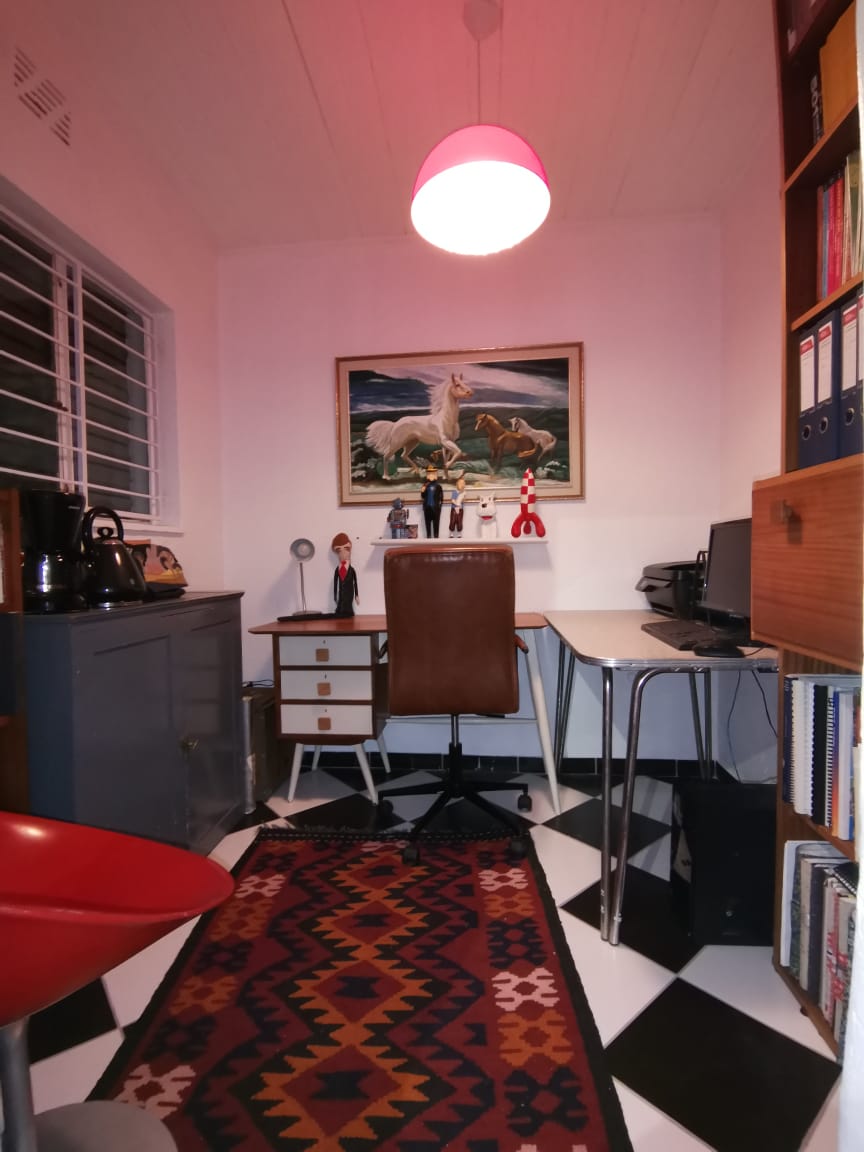 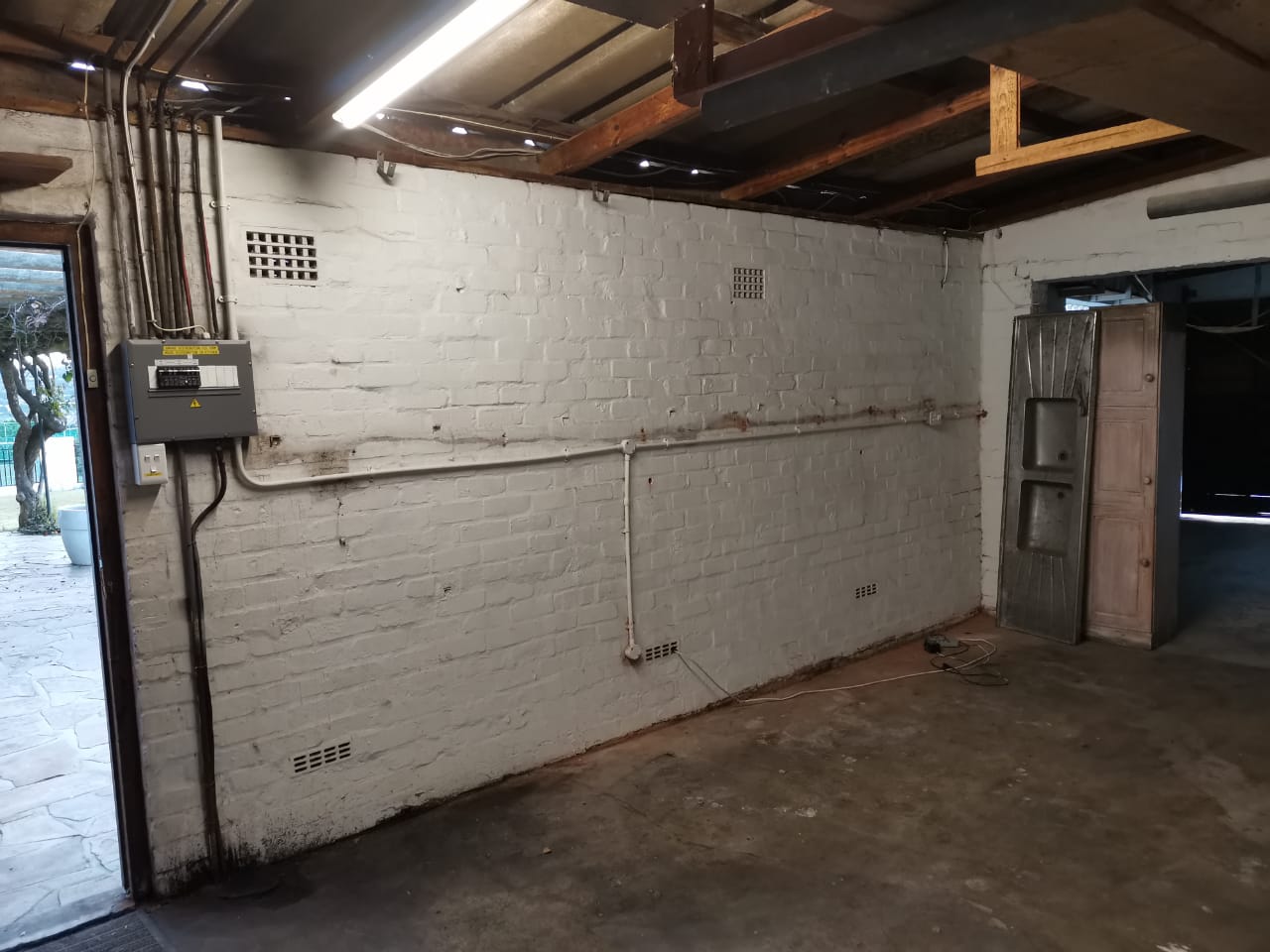 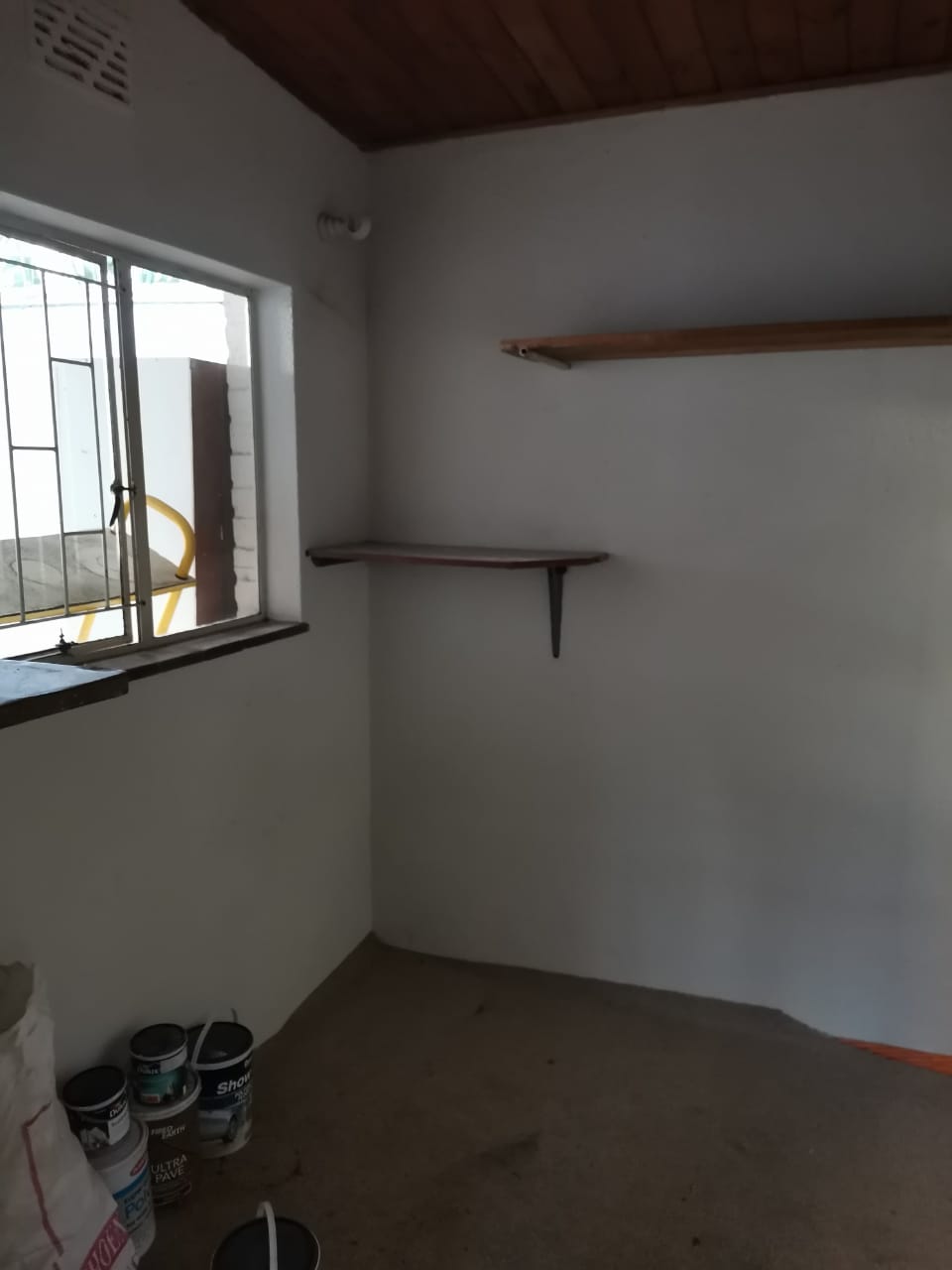 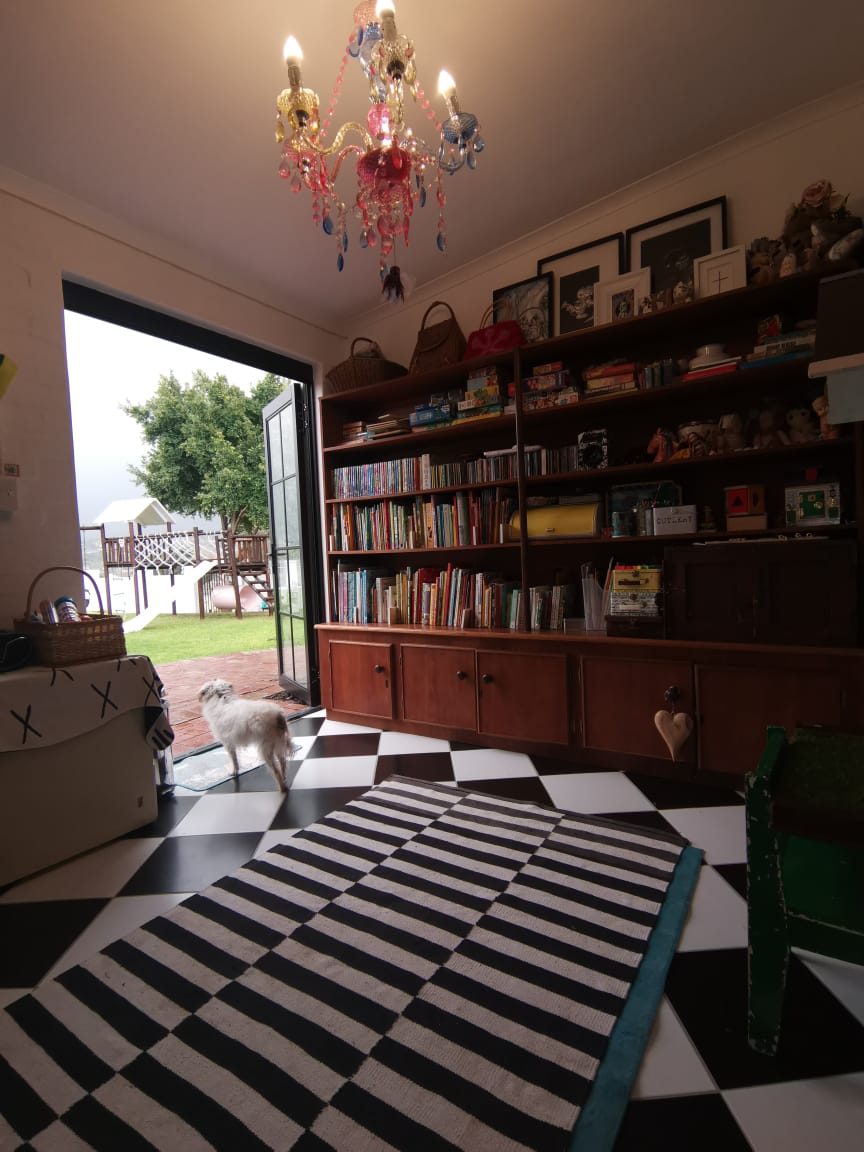 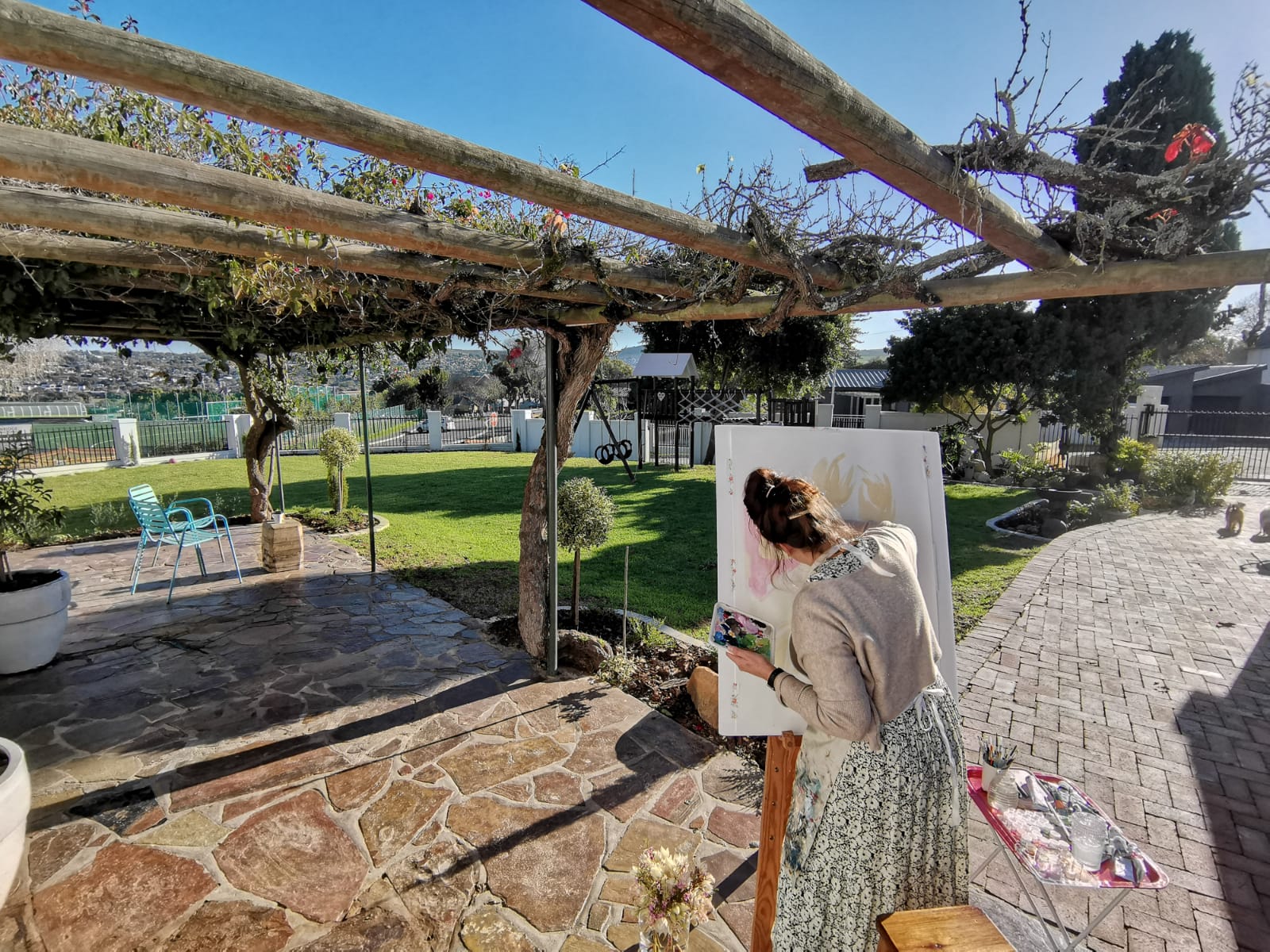 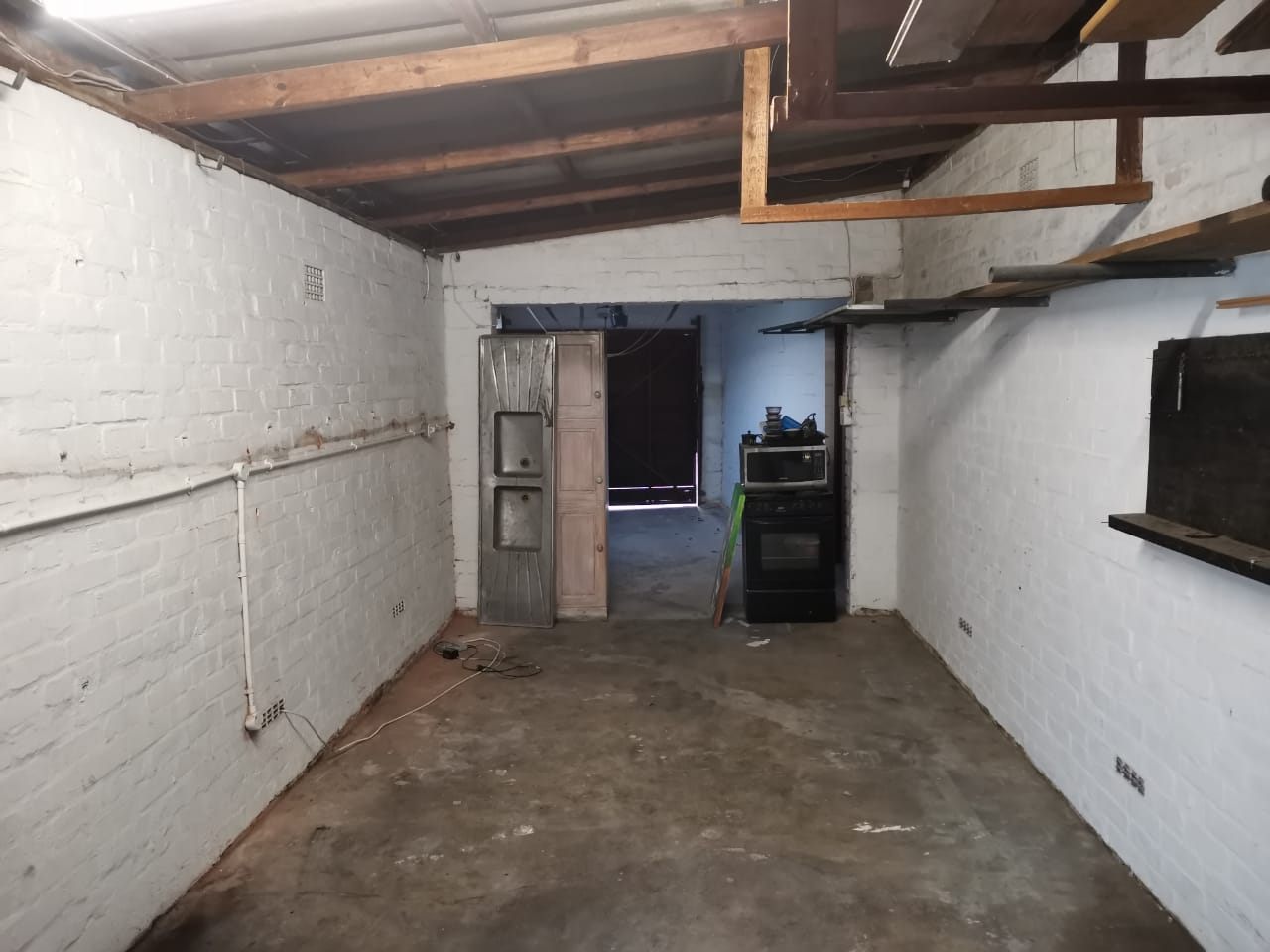 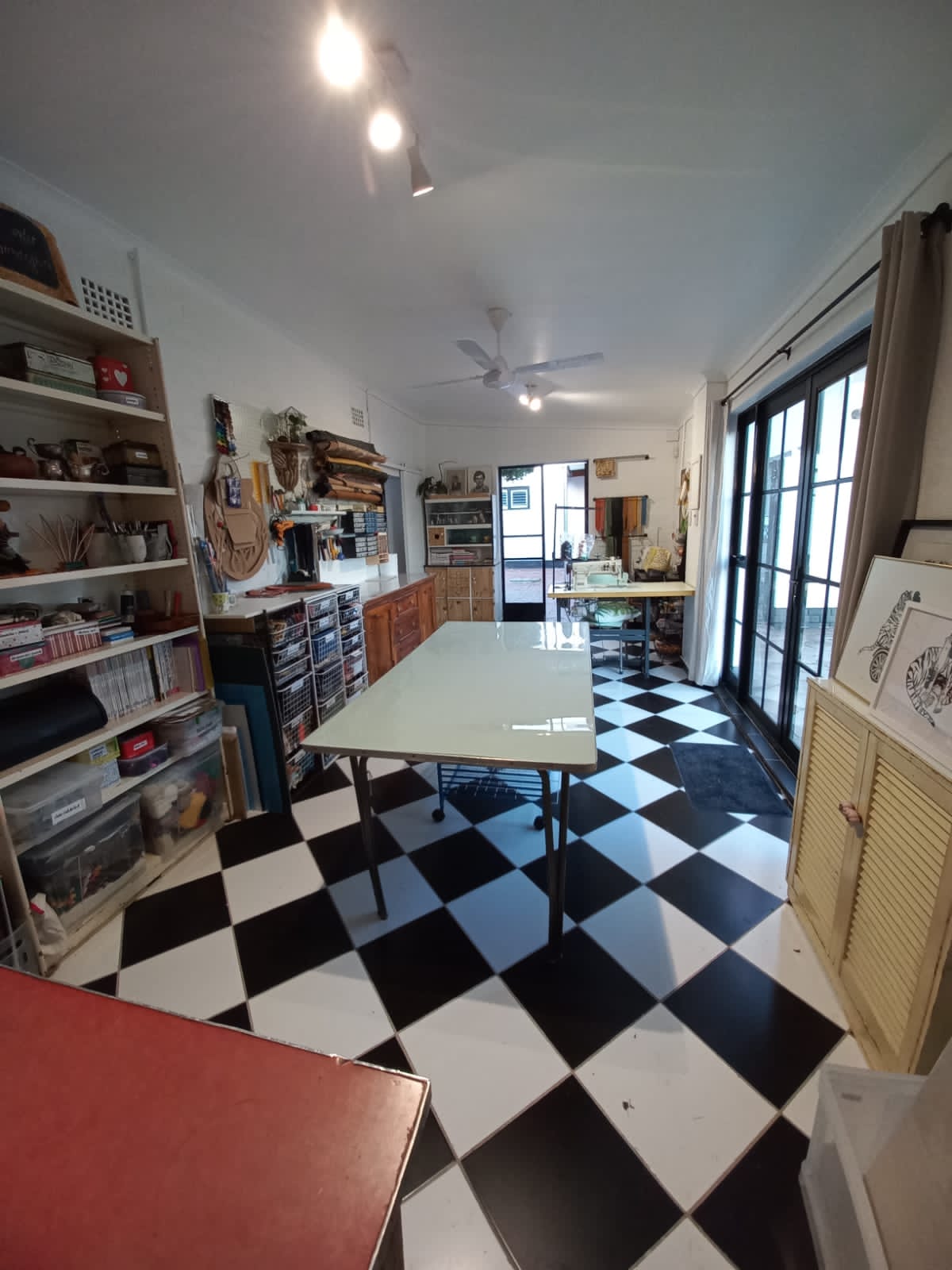 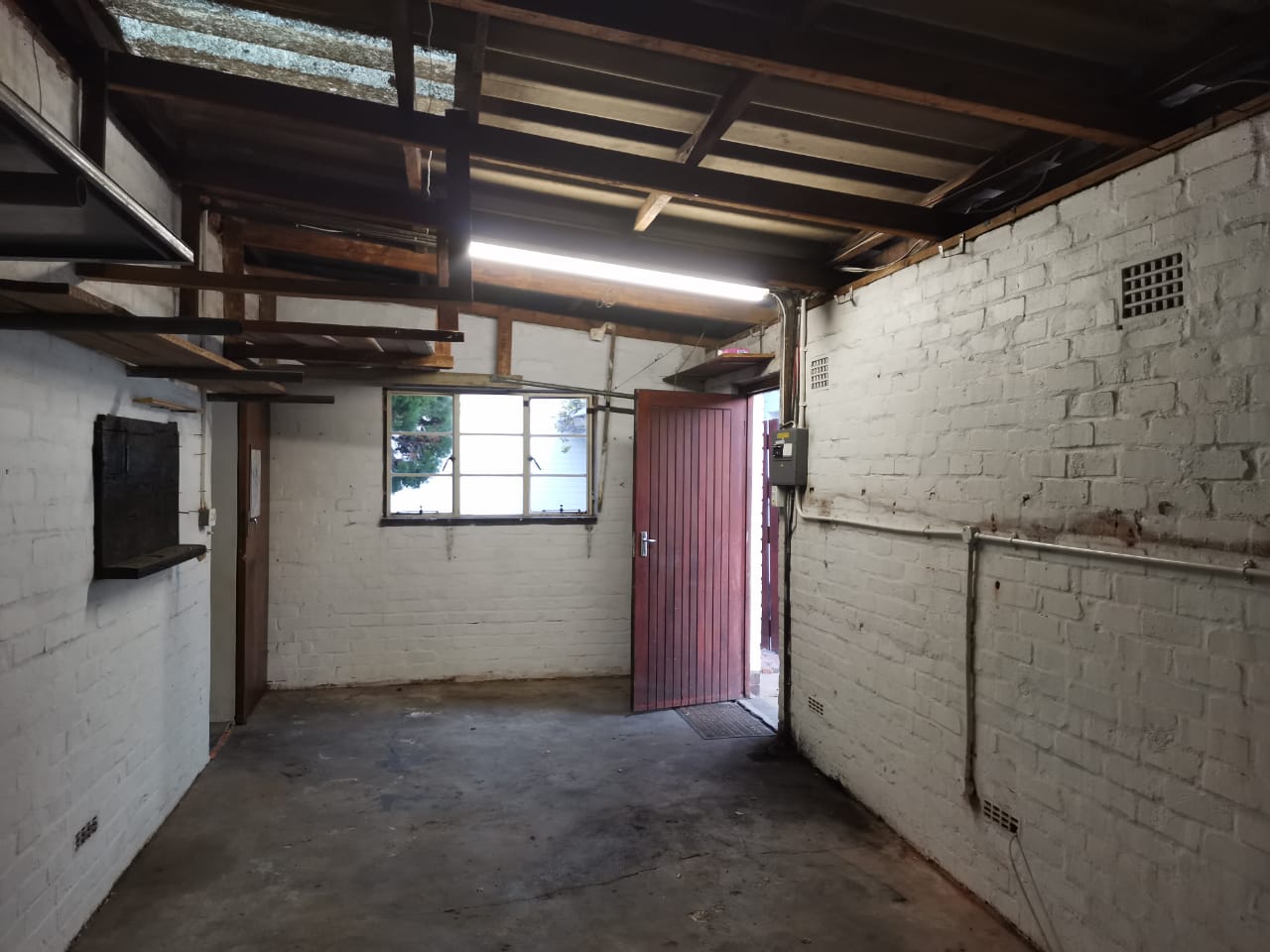 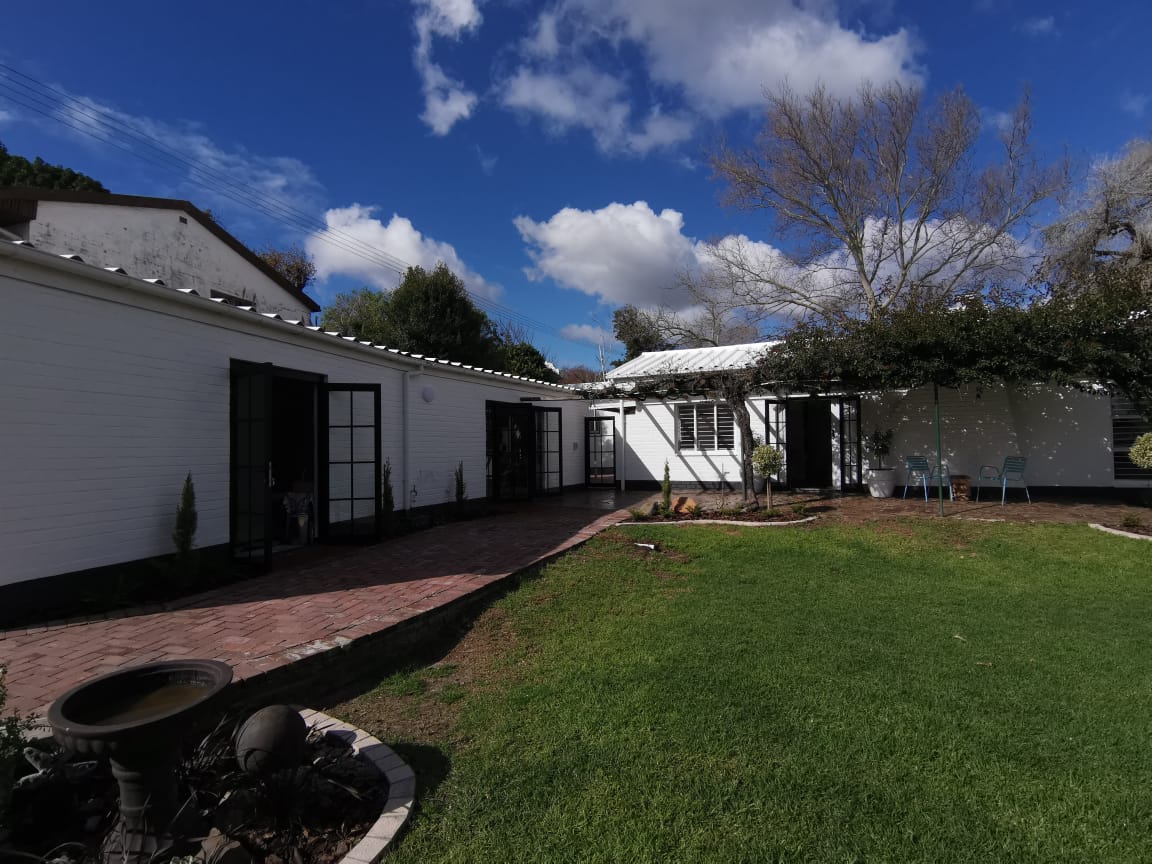 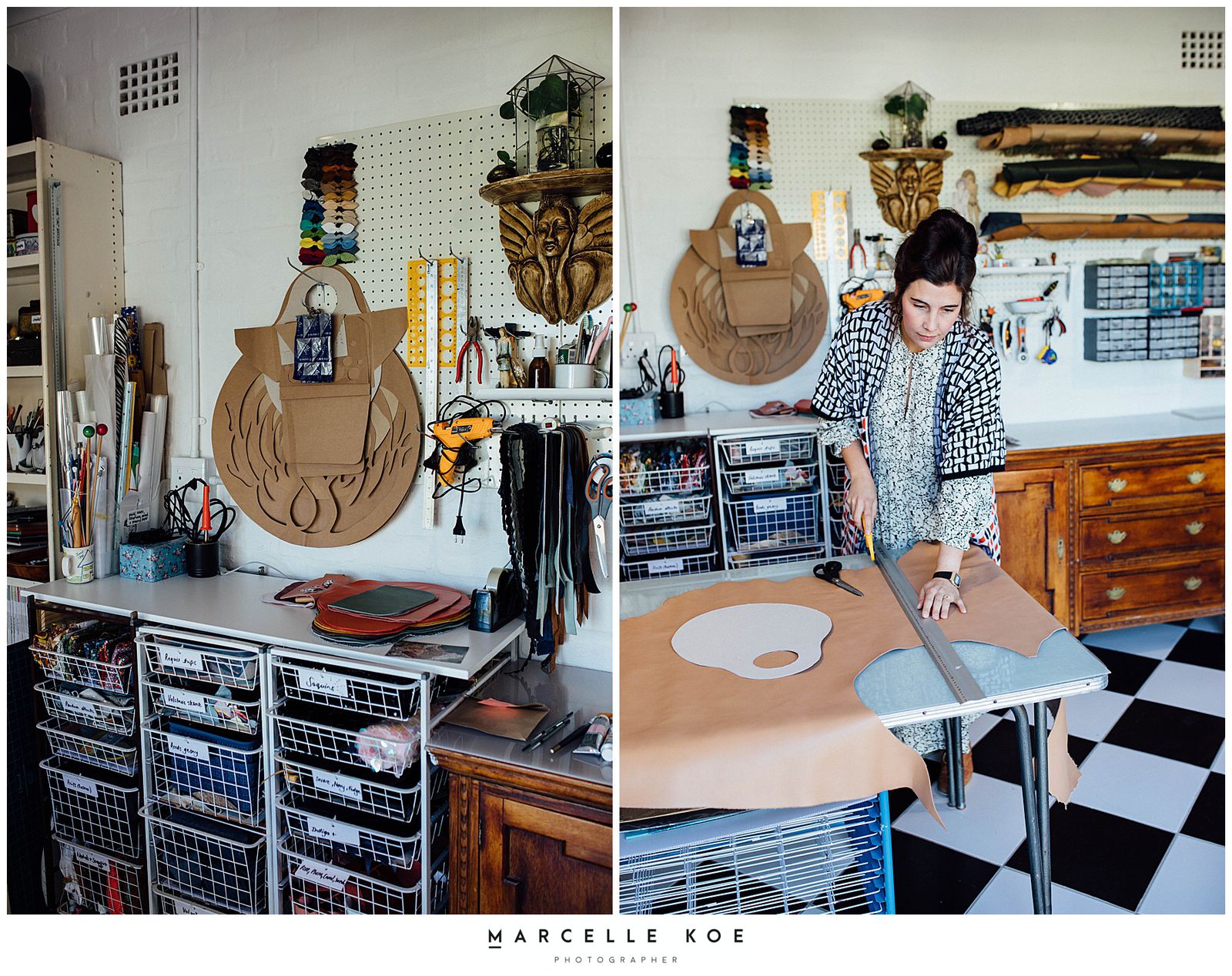 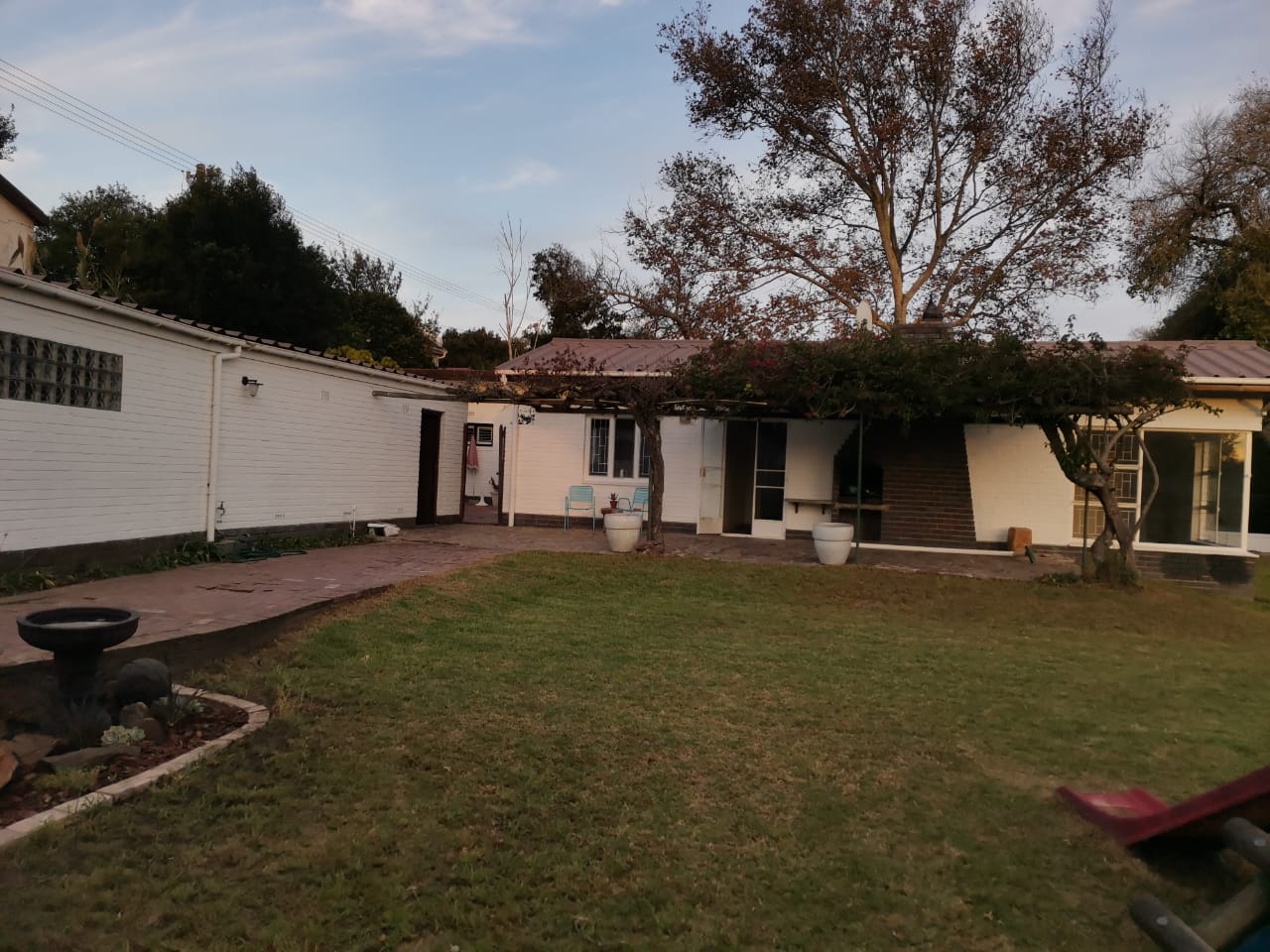 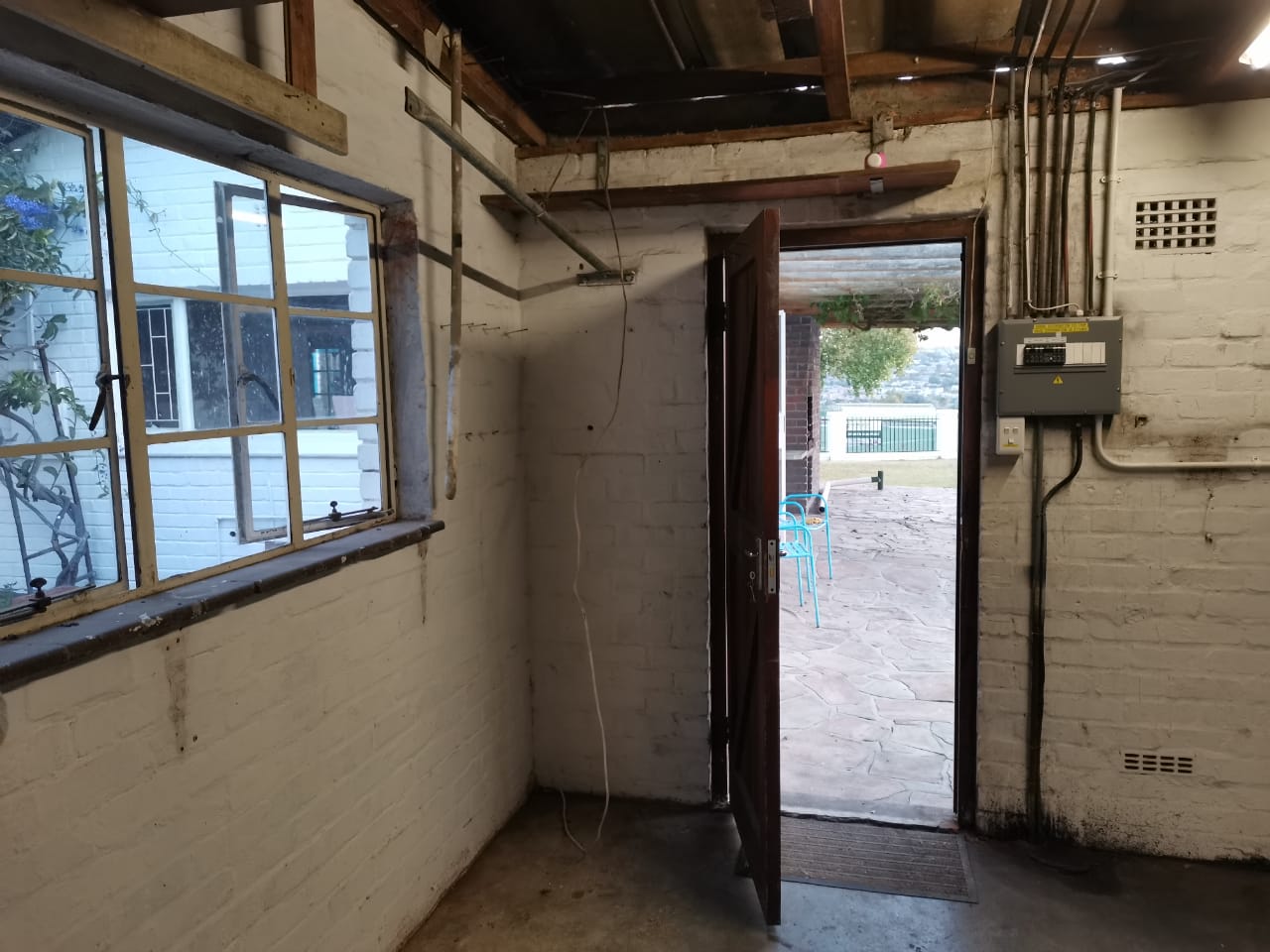